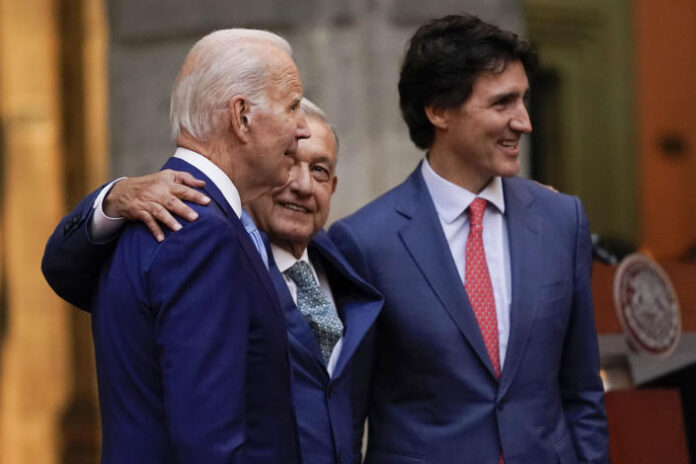 President Joe Biden, Mexican President Andrés Manuel López Obrador and Canadian Prime Minister Justin Trudeau sought to downplay their frustrations with one another on migration and trade as they met for the near-annual North American Leaders Summit.

The leaders offered a unified front on Tuesday despite tensions that have put a strain on their relationships even as Biden has made repairing alliances a cornerstone of his foreign policy agenda.

The tensions were front and center when Biden and López Obrador met on Monday, with the Mexican president complaining of “abandonment” and “disdain” for Latin America.

But as they closed Tuesday’s summit in Mexico City with a joint news conference, the leaders offered an optimistic outlook.

“We’re true partners the three of us,” said Biden, adding that they had “genuine like” for one another. “We share a common vision for the future, grounded on common values.”

López Obrador, for his part, thanked Biden for not building “even one meter of border wall,” a not-so-subtle dig at Biden’s Republican predecessor, Donald Trump. The warmth during their joint press conference stood in stark contrast to the more brusque exchange a day earlier.

The three-way gathering is held most years, although there was a hiatus while Trump was president. It’s often called the “three amigos summit,” a reference to the deep diplomatic and economic ties among the countries.

However, the leaders have found themselves at odds, especially as they struggle to handle an influx of migrants and to crack down on smugglers who profit from persuading people to make the dangerous trip to the United States.

In addition, Canada and the U.S. accuse López Obrador of violating a free trade pact by favoring Mexico’s state-owned utility over power plants built by foreign and private investors. Meanwhile, Trudeau and López Obrador are concerned about Biden’s efforts to boost domestic manufacturing, creating concerns that U.S. neighbors could be left behind.