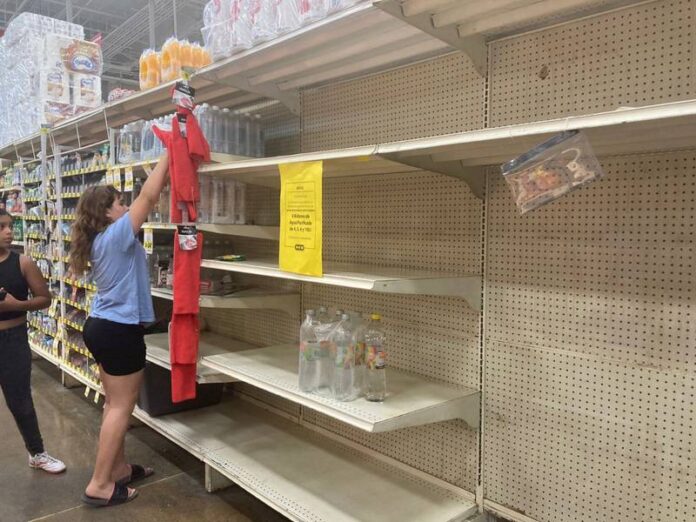 Up to 15% of food and products such as milk, bread, tuna, grains, edible oil, toilet paper, bottled water, and beer show shortages and signs of shortages, Anpec reported.

The scarcity and shortage of basic products has already been present in traditional stores and supermarkets in the country; and hand in hand with rising prices, it has become a new threat to consumers, warned the National Alliance of Small Businesses ( Anpec ).

The president of Anpec, Cuauhtémoc Rivera, informed Publimetro that these establishments already have a shortage of up to 15% in foods such as milk, bread, canned tuna, pickled chilies and groceries in general.

Although he pointed out that the products that have been most scarce in recent days are toilet paper, edible oils, bottled water, soft drinks, beer and basic grains such as wheat and corn.

Cuauhtémoc Rivera pointed out that businesses take up to 15 days to replace, stock and have 100% of the shelves; due to the fact that suppliers reduced their supply operations to 50%: from four to two visits per month.

He indicated that stores, supermarkets and the population living on the outskirts of large cities and rural areas are the most affected by the scarcity and the first signs of shortages of basic products in the country.

“Supermarket shelves display various options for food, groceries and products, but the consumer cannot find the usual brand or presentation; while in the small stores there are few or missing pieces of box bread, pastries, tuna, and groceries, ”he pointed out.

Rising prices and scarcity, are at a critical point

The president of Anpec indicated that the national market for food and basic products is at a “ critical point ”, due to the increase in prices and scarcity; whose impact can get out of control during the summer and generate a general shortage in July, August and September.

“ Each time we have a market with fewer products and there is a very thin line that divides scarcity from shortage ”; whose effects are added to a ” food inflation ” that exceeds 11% and, together, can be the prelude to a more serious problem for the end of the year season, which starts in September, she pointed out.

Regarding the causes that have led to the alarm bells ringing, the leader of Anpec explained that this is the result of the rise in prices, the increase in the cost of oil, gasoline and gas; as well as the impact of the war in Ukraine, which affects the energy market, grains and the cost of raw materials.

“Suppliers have told us that companies are not producing 100%. Many industries are becoming more complicated every day to find supplies; as is the case of the scarcity and increase in the price of cardboard, glass, and aluminum, among other raw materials.

“In addition, the main ports are still congested without finding an expeditious way to transport merchandise and raw materials, so thousands of containers await to reach their destination and all this leads us to a critical point between inflation, scarcity and shortage. ”, concluded Cuauhtemoc Rivera.

“The shortage is checkmate to the economy of Mexican consumers. We must prepare for an ongoing food crisis, which goes beyond the issue of prices; we can experience prolonged spasms of shortages”.—   Cuauhtemoc Rivera, president of Anpec

Products that pay the most to your pocket

Banco BASE reported that the products with the highest annual price increase, which hit the pocket the most, at the end of May are:

Regarding the note “Scarcity and shortage of basic products raise alert in Mexico”, published in the Economy section of Publimetro on June 13 of the current year, based on the statements of the president of ANPEC, Cuauhtémoc Rivera, this Attorney General’s Office makes the following clarifications: