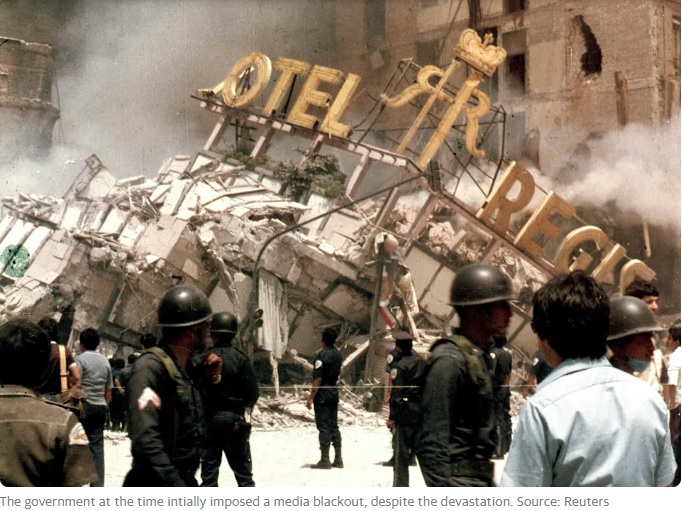 On September 19th, 1985 a major earthquake shook Mexico City. Parts of the city shook for over three minutes and the initial shock killed at least 5,000 people.

The earthquake measured as high as 8.0 on the Richter Scale, followed by two aftershocks – one on 20 September measuring 7.5 and another as long as seven months later in April 1986 measuring 7.0.

While the aftershocks occurred later on, and off the coast, they continued to wreak havoc on the city due to their magnitude and the geology of the area.

According to reports, the energy released during the main earthquake was equivalent to around 1,114 nuclear weapons exploding, and the shock was felt as far away as Los Angeles and Houston.

As well as killing thousands of people, with many left buried under rubble, the quake destroyed 100,000 houses, leaving millions of people without electricity or water.

Historic buildings in the heart of the city were destroyed, including museums, monuments and cathedrals, as well as vital infrastructure like hospitals – with one of the most acutely hit areas where the highest concentration of hospitals were.

The government initially refused any foreign aid, but changed its mind following the 20 September after shock.

Some countries sent help, while US first lady Nancy Reagan toured Mexico City with US ambassador to Mexico, John Gavin.

Much of the city was rebuilt in the ensuing years following the devastating quake, and an early-warning alert system was set up to warn of future earthquakes.

Mexico also created a Civil Protection Committee was created to train rescue workers, police, hospital staff and others, while evacuation drills are also carried out in public buildings.

However, much of the rebuilding work has taken place in the centre of Mexico City and there remains a dispute over how many people actually died in the 1985 quake – with some estimates as high as 30,000 people, though many put the figure at around 10,000.

And despite efforts to protect people, millions of people still live in high-risk areas in terms of any future earthquakes.