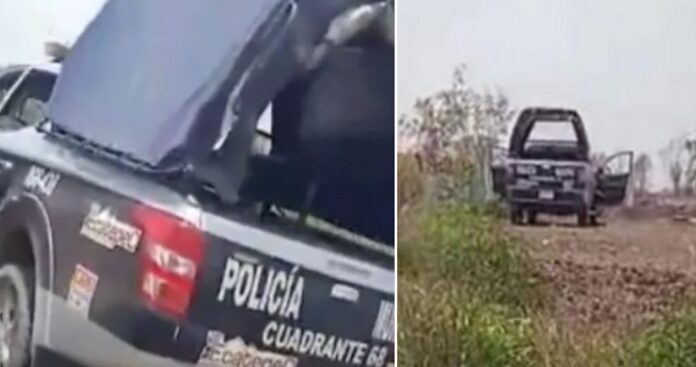 The municipal authorities confirmed to the media that the couple was discharged for “non-compliance with the disciplinary regime.”

A couple of policemen were fired after being caught having sex during duty hours, in uniform and aboard a patrol from Ecatepec that parked in a vacant lot in Nezahualcóyotl, State of Mexico.

The couple was videotaped on Friday, without their consent, by someone who was passing through the place. The uniformed men were inside the RG6-438 pick-up unit, in quadrant 68, parked on a lot located between Nezahualcóyotl and the CTM 14 neighborhood, in Periférico Oriente.

The witness first recorded from a distance and gradually approached the patrol, which was with the driver’s and passenger’s doors open, as well as the windows. Both were having sex wearing the Ecatepec police uniforms.

The municipal authorities confirmed to the media that the couple was discharged for ” non  – compliance with the disciplinary regime.”

Whoever recorded them could spend 6 years in prison

Although the municipality suspended the police, on the other hand, there is a law that punishes with penalties of up to six years in prison for disseminating images of sexual content without the consent of the person involved and it came into force in June throughout the country.

It is about the  Olimpia Law  or Article 166 Octies of the Federal Penal Code, referring to the crime of violation of sexual intimacy:

“Anyone who discloses, shares, distributes or publishes images, videos or audios of intimate sexual content of a person who is of legal age, without their consent, approval or authorization, commits the crime of violation of sexual intimacy” .

In addition, those who ” videotape, audio record, photograph, print or make images, audios or videos with intimate sexual content of a person who is of legal age, without their consent, approval or authorization” is also punished.

The penalty that the person who videotaped and broadcast the video could receive ranges from three to six years in prison, plus a fine of five hundred to one thousand UMAs. However, when dealing with two victims, the punishment could be doubled.