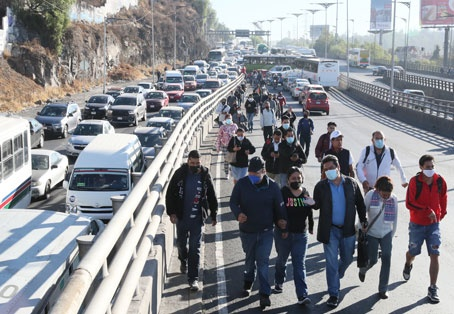 Mexico City. For more than four hours, Mexico City collapsed due to the blockade carried out by the members of the Broad Transport Force (FAT), who occupied the main roads as a form of pressure for the authorities to allow an increase of two pesos to the concessioned service.

The minibuses that arrived at its base interrupted the runs and affected thousands of users who had to get to work.

Karina Chávez was forced to report the delay to her office, located by the Monument to the Revolution; By not giving an estimate for his arrival, his boss asked him to go home.

Thousands tried other alternatives, but it was impossible due to the blockage of main avenues. Cecilia Ramírez, who was heading from División del Norte and Acoxpa to Plaza Loreto, took two hours.

Claudia Contreras waited until after noon to leave the city center to the Vaqueritos roundabout.

The horns did not serve to move the protesters, who showed banners and cardboard in which they asked for the increase in the price of the ticket and the cancellation of various rights so that thousands of motorists were trapped.

People could not use another means because several stations on lines 1, 3 and 5 of the Metrobús were left without service, while the Metro was insufficient to absorb the demand of passengers.

The long wait on the platforms led many people to better return to their homes, “because not even praying to all the saints did I get to my work because these guys closed the way to the truck here in Indios Verdes,” lamented Teresa Díaz.

The pilgrimage of motorists in search of alternative routes, as well as pedestrians, was a constant during more than four hours of blockade.

Unions will hold demonstrations in CDMX this March 11

This March 11 there will be several demonstrations and union marches that will block the roads in the main streets of CDMX.

This Thursday, March 11, there will be different demonstrations in the CDMX, among which several marches by workers and employees belonging to different unions stand out.

The first march will be held at 6:30 am by members of the Mexican Union of Electricians (SME) and the National Assembly of Electric Power Users (ANUEE) who will advance from Antonio Caso street in the Tabacalera neighborhood passing through avenue Paseo de la Reforma in the Juárez neighborhood.

Then it will be integrated into Avenida de los Insurgentes to reach the Lázaro Cárdenas Central Axis and Avenida 5 de Mayo to finally enter Plaza de la Constitución avenue in front of the National Palace located in the Cuauhtémoc mayor’s office.

During the day, a concentration of the Federation of the Union of Workers at the Service of the State is also expected in calle Valentín Gómez Farías number 40 of the San Rafael neighborhood.

On the other hand, in the Coyoacán mayor’s office, a concentration of the Workers’ Union of the National Autonomous University of Mexico (STUNAM) is expected in the Rectory Tower of the UNAM.

Today does not circulate

Remember that this Thursday , March 11, there are no vehicles with green stickers and license plates 1 or 2.