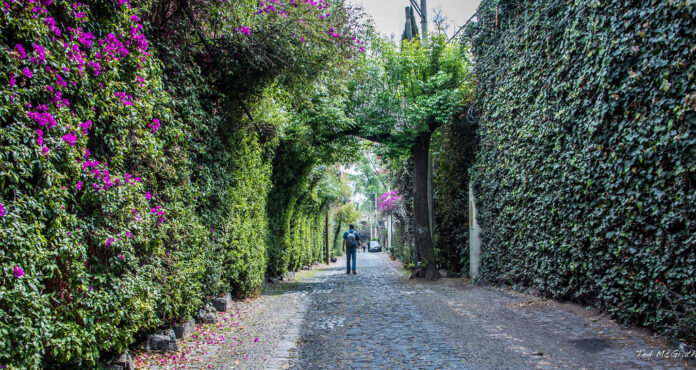 Pedestrian zones carry two important messages. The first is one of inclusion, since its protagonists are people, and not cars. The second is a more symbolic message: an aesthetic one, because pedestrian areas give the opportunity to contemplate with time and patience the beauty of cities.

In Mexico City, the region with the most pedestrian zones is the Historic Center, where, thanks to a remodeling work carried out a few years ago, there are at least 18 pedestrian streets that, together, have practically “pedestrianized” the most important center of the city. country.

Other places in the city have also been suitable with ridges for walking around the city or their sidewalks have been enlarged to accommodate many people. The pedestrian zones are an incentive to enjoy and live the city; without them, it would be almost impossible to go through it calmly enough to know its details.

In the historical center:

Francisco I. Madero: this street was inaugurated as a pedestrian street in 2010. It has become one of the busiest in the entire country due to its financial importance, but also because it has historically been very traditional. It practically became a sidewalk traveled by up to 200 thousand people a day, that is, some 55 million individuals visit it annually.

Regina: it  is known as a Cultural Pedestrian Corridor, inaugurated in 2008. A beautiful route between shops, collection stores, inns, neighborhoods, toy stores and mezcalerías that have added an atmosphere of proposal to the site. Some artists from the city have gone to live here.

San Jerónimo: this pedestrian corridor is one of the few that includes a square, the San Jerónimo square, located between February 5 and Isabel la Católica, used for the presentation of cultural and artistic events.

Motolinia: this street is more famous at night, for hosting some nightclubs where concerts or events are held.

Talavera: according to legend (and is remembered by a small statue on the site), it was in this street that the eagle of the Aztec legend was found devouring the serpent. On this street there are good coffee shops; It is also known as “del Niño Dios” because of the dozens of stores that sell this figure and its traditional clothing.

In the Zona Rosa:

Genova: it is the main street in the Zona Rosa and was recently paved. A nice walk through bars, cafes, the José Luis Cuevas Art Corridor. One way from Reforma to Liverpool Street.

José María Vigil: just a few months ago the quarry was adapted and the Tacubaya Tourist Corridor was inaugurated. One of the main reasons for making this area pedestrian was to preserve the tourist life of Casa Luis Barragán, which has become a cultural corridor. The walk, in addition to the house of this legendary architect, also runs through the Peña Manterola market, the Charles de Gaulle square and the Lira park, among other spaces.

Camellón de la Avenida Álvaro Obregón: this avenue in the Roma neighborhood has become one of the emblematic sites of this area. Here you will find gourmet restaurants, designer stores, bookstores, tacos, vintage clothing, etc. A mix that describes this colony that plays between retro and avant-garde. In its central ridge, you can sit in the shade of a tree or listen to one of its fountains in honor of some Greek gods.

Glorieta de La Cibeles:  In Colonia Roma Norte, in Plaza Villa Madrid, there is a replica of the goddess Cibeles found in Spain, which was donated by the Spanish community in Mexico in 1980. The neighbors began to name this place the Fuente de la Cibeles, and last summer, after the remodel, it became the ideal place to hang out in Roma.

Camellón de la Avenida Ámsterdam: it is one of the most unique, due to the elliptical shape of this avenue. Its central median bordered by benches and gardens is the path of runners and pet walkers, and it gives life to this neighborhood with a remarkable public space: not everything is shops and restaurants.

Camellón de la Avenida Mazatlán: also located in La Condesa, it is used by the inhabitants of the place to exercise or go out to contemplate the people who walk through the place for a while.

President Masarik:  In no neighborhood of the city will you find such an offer of restaurants, bars, shops and other establishments as in Polanco. Added to this are art galleries, museums and bookstores. In addition, this neighborhood has become an important business center and several of the best hotels are located here.

Paseo de la Reforma: this avenue was joined by a project of the dictator Porfirio Díaz with benches, street furniture, trees and exhibitions; It is the most important avenue in the country and its pedestrian life is one of the most influential and beautiful. The walk through this includes passing through the Chapultepec forest, the Tamayo Museum, the National Museum of Anthropology and History and the Torre Mayor, the tallest building in Latin America. It is 12km long and in its most important section, which is where the museums are located, it also houses a pedestrian corridor to the center.

Cuernavaca Railway (linear park): this work has pedestrianized what is known as “Nuevo Polanco”, where museums such as Soumaya or Jumex have been erected and shopping malls and department complexes have been built. This work makes the place feel much more inclusive and comprehensive.

Camellón de la avenida Horacioddle: this central pedestrian ridge makes the Polanco neighborhood, so fresh due to its large number of trees, “contemplable”. Around here, it is possible to appreciate the life of the area with young Jewish mothers or Orthodox Jews crossing the place, in addition to seeing the office workers or athletes of the area pass.

Plaza San Jacinto marks the heart of San Ángel and is a plaza known for its exceptional beauty and bloody history. The square saw the hanging of Irish deserters who, during the war between Mexico and the United States, abandoned the American troops and aligned themselves with the Mexicans: a commemorative plaque was placed in the square listing the names of the Irish soldiers. Today, this square is home to the  Saturday Bazaar, great restaurants, and many beautiful and historic buildings.