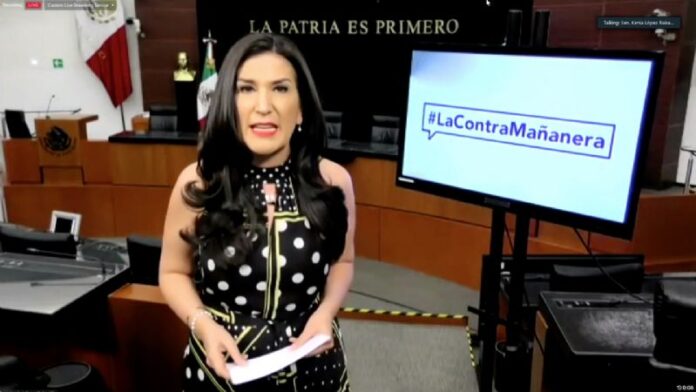 The PAN senator thus reacted to the president’s statement that Sunday’s march was a “political striptease” of conservatism.

MEXICO CITY.- PAN senator Kenia López Rabadán reacted to the statement by President Andrés Manuel López Obrador, who considered that Sunday’s march in defense of the National Electoral Institute “was like a kind of political, public striptease of the conservatism in Mexico.

In her conference entitled La ContraMañanera and from his Twitter account, López Rabadán reacted to the statements with which the president tried to discredit the demonstration of opponents of his electoral reform proposal.

“In a striptease there are naked people and López Obrador is naked because it is clear that he is upset, disoriented, frustrated, he is out of his mind in the face of the massive mobilization that we had throughout the country,” she asserted.

She also described the president as misogynist and macho for the way he referred to PAN deputy Margarita Zavala and PRI senator Claudia Ruiz Massieu.

Likewise, in a thread he argued that with the “three inefficient works” promoted by the president, 55 years of INE could be paid for. “It is clear that López Obrador does not want to save, what he wants is to turn the electoral referee down,” she asserted.

“With the whims of López Obrador and his 3 inefficient works, 55 years of the INE could be paid for. They want to destroy the INE on the pretext that it is very expensive, but that is a lie,” the senator said.

She explained that the Chamber of Deputies has assigned a total of 20 thousand 221 million pesos to the INE for next year.

“The Mayan Train has cost Mexicans 300 billion pesos. With the cancellation of the Texcoco airport and the construction of AIFA, 448 billion pesos have been spent.

“With the whims of AMLO in this six-year term in these three works, we could pay 55 years of the INE,” he concluded.