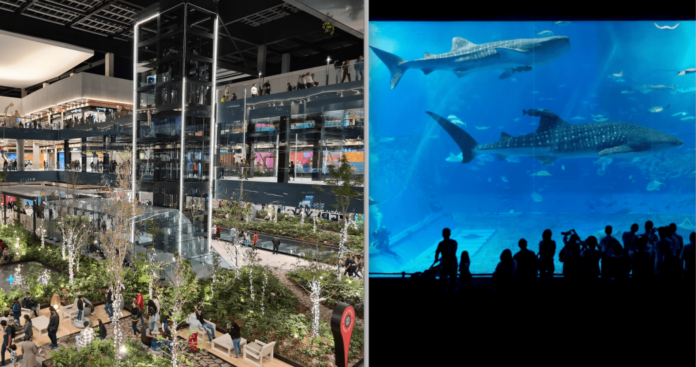 The new Tepeyac Park has 55,000 square meters and the largest aquarium in Latin America in the GAM city hall.

This mega shopping center promises to change the face of the Gustavo A. Madero mayor’s office with the construction of Tepeyac Park, one of the largest in Latin America with 55,000 square meters that, in addition to having offices and commercial premises, will contain the largest aquarium in Latin America. .

The investment made for the Park exceeds 6,000 million pesos, and although construction began in 2018, it had several delays due to the closure of the Mexico City government windows, the change of administration and the coronavirus pandemic.

Despite everything, the works were scheduled to end in 2022 and there are already high expectations for the amazing building that will have access through the avenues of Eduardo Molina, Pelícano and Calle San Juan; not far from the Martín Carrera metro station, which is connected to Line 4 and Line 6.

Fibra Danhos is a real estate trust and the company in charge of developing this mega project. In its portfolio there are also shopping centers such as Parque Delta, Duraznos, Lindavista, Tezontle, Antenas, and Vía Vallejo; in addition to Parque Virreyes, better known as the Dorito building.

What stores does Parque Tepeyac have?

” Parque Tepeyac itself had an important change in its entire design and concept since covid, more open spaces were left, more ventilated, we changed a little the scheme of the closed shopping center and then to this slightly more hybrid scheme of openness and spaces green, we had already done it in Parque Las Antenas”.

The largest aquarium in Latin America

The aquarium has 30,000 square meters, it will be an entertainment center that will have no competition in Mexico, and much larger than Grupo Carso’s Inbursa Aquarium, which has 7,000 square meters.

It will have the support of academic institutions for the preservation of the species and so far the number of species and specimens that will inhabit this aquarium is unknown, nor have the costs to enter been revealed. What he does know is that Fibra Danhos has worked with the owners of the Michín aquarium located in its Parque Puebla y Guadalajara shopping center .

How to get to Parque Tepeyac

To arrive by public transport, the closest Metro Collective System stations are  Martín Carrera , line 4 and 6,  and  Talismán , line 4. As for the Metrobús, there is the  San Juan de Aragón  and  Martín Carrera station .

How much: still no official data