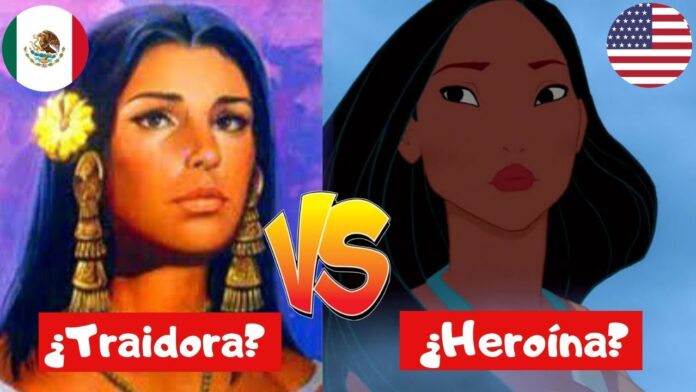 Although the lives of Pocahontas and La Malinche have a very similar history, their reputations are different. Find out why.

In Mexico, few historical figures receive as much contempt as Malinche. His name inspired the word “malinchismo” which, according to the RAE, means the attitude of those who show attachment to foreigners with contempt for their own.

By contrast, Pocahontas, who was born more than 90 years after La Malinche (c. 1502), in Virginia, USA, gets a heroin deal. This perception was catapulted by the Disney animated film that shows a romantic version of the princess’s life that, according to historians, is far removed from reality.

Main similarities between Pocahontas and Malinche

Despite the great difference in perception of these two characters in their respective countries, there are several similarities between the lives of Pocahontas and La Malinche, these are just some of them:

Malintzin’s or Malinalli’s father was a powerful cacique from Painala , Coatzacoalcos. For her part, Matoaka or Pocahontas, was the eldest daughter of the chief of the Powhatan tribe settled in what is now the state of Virginia.

They witnessed the arrival of Europeans to the American Continent

Both witnessed the arrival of the conquerors to the continent. La Malinche served as an interpreter for the Spanish conquistador Hernán Cortés, witnessing in the front row the meeting of the two worlds. Pocahontas lived the moment of the arrival of the British explorer John Smith, together with more than one hundred men, to colonize Virginia.

They served as intermediaries and translators

Thanks to her diplomatic and linguistic skills (she spoke Mayan and Nahuatl), La Malinche was a key player for Cortés when making alliances, this fact has been interpreted as treason against the country.

According to John Smith, when he was about to be executed by the Powhatan tribe, Pocahontas threw herself on him to protect him and save him from death, although some historians doubt that this really happened. Pocahontas served as a liaison to pacify conflicts between her home tribe and the English and reach agreements; later, as the wife of Englishman John Rolfe, she helped maintain commercial relations between Jamestown, England, and Powhatan.

They suffered slavery and abuse

When La Malinche’s father died, her mother married another cacique and together they had another son who would be named the heir to the cacicazgo. La Malinche was sent to Tabasco to be sold into slavery. She was bought there by a Chontal cacique. At only 15 years old, La Malinche was given to Cortés not only to be his servant but also to satisfy his carnal desires and those of his lieutenants.

Pocahontas, for her part, was also kidnapped by the English at the age of 15 and remained in captivity for a year during which she was sexually abused by her captors.

They were baptized and converted to Christianity

Cortés had La Malinche baptized with the name of Marina in order to make legitimate use of her. On the other hand, Pocahontas, after being released, was converted to Christianity and given the name Rebecca. In 1614 she married the Englishman John Rolfe.

They had children of Europeans

La Malinche had a son by Cortés named Martín Cortés and is considered one of the first mestizos of New Spain. When he was barely two years old, Martín was torn from his mother’s womb and later sent to Spain. He never saw La Malinche again.

Pocahontas and Rolfe had a son named Thomas who was recorded as the firstborn to a native woman and an English man.

Did you know the great similarities between Pocahontas and La Malinche? Do you think that the figure of La Malinche should be vindicated in our country?