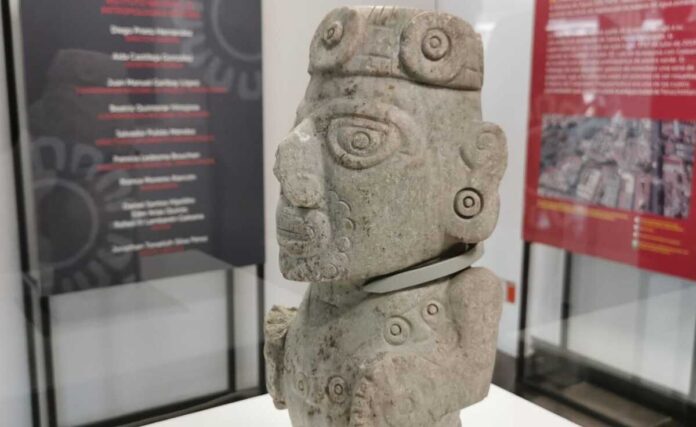 After being buried for five centuries, the Xochipilli-Macuilxóchitl sculpture is exhibited to the general public in the Museo del Templo Mayor as a reminder of the vast pre-Hispanic past of the country.

The piece was found in July 2019 during the rehabilitation work of the Santa María la Redonda parish, right at the intersection of Violeta and Galeana streets in the Guerrero neighborhood.

After recovering the 36-centimeter-high and five-kilogram sculpture, archaeologists from the National Institute of Anthropology and History (INAH) subjected the piece to a cleaning and identification process to deliver it to the collection of the Museo del Templo Mayor.

In the presentation of the exhibition The discovery of Xochipilli-Macuixóchitl in the old neighborhood of Santa María Cuepopan, Diego Prieto, head of the INAH, explained that it is a sculpture from the last stage of Tenochtitlán that was alone at the burial from which it is deduced that was placed by accident or was carried by the river current.

“Probably one of the four that formed part of Tenochtitlán was part of the main altar in the center of the Cuepopan neighborhood, which was later called Santa María Cuepopan, later renamed Santa María La Redonda,” said Prieto, recalling that Violeta Street was a road that communicated the east and west of the city, so the discovery of ancient pieces is not strange.

Despite being three meters underground, the sculpture only has a broken nose. The researchers determined, from the Bourbon codices and the First Memorials, that the piece refers to the gods Xochipilli and Macuilxóchitl, as it shows attributes of both. The first wears the headdress, the necklace with chalchihuites and the chimalli, and the second protrudes the mouth that shows seven teeth and simulates a flower, but represents the palm of a hand.

The character wears a maxtlatl or loincloth, carries jewels typical of the nobility such as wavy lines around the mouth, earmuffs, a necklace, and a shield with his arrow or dart.

Macuilxóchitl-Xochipilli was linked with joy, music, song, the dawn, the child sun, and his role was to attend to the nobles who participated in banquets, dances, and hunts where honors were paid to him.

Through a scanning electron microscope, it was determined that the carving is in marbled marble and rock with streaks of serpentine, from between 1469 and 1481.

“Public work does not damage heritage“, the official said.

Diego Prieto took advantage of the sculpture’s presentation to ensure that public works do not harm the country’s historical heritage. He made special mention of the construction of the Felipe Ángeles Airport in the State of Mexico and the Maya Train project in the southeast of the country, both in areas of pre-Hispanic vestiges.

“Public works do not necessarily destroy heritage, on the contrary, it contributes to making more important findings such as the Coyolxauhqui, which was discovered precisely as a result of electrification works,” he pointed out.