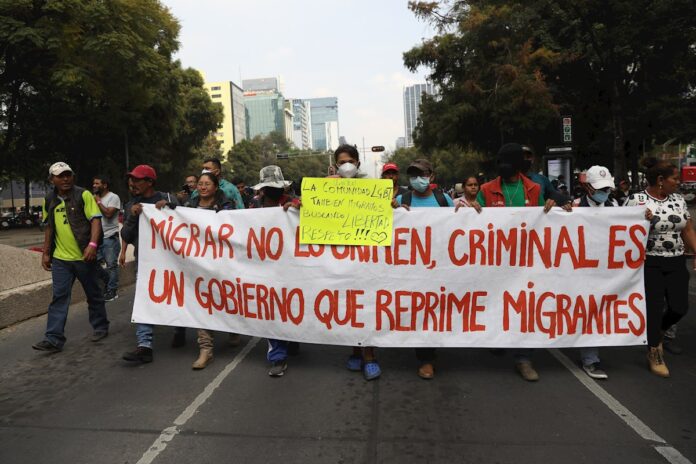 Migrant caravan marches in CDMX to demand respect for their rights

Hundreds of members of the migrant caravan that left Tapachula, Chiapas last October, marched this Saturday, December 18, 2021, in Mexico City ( CDMX ) to commemorate International Migrants Day, demand respect for their rights, and that they stop the violence against them.

The illegal migrants walked along Paseo de la Reforma avenue, in the capital, carrying banners with legends such as “Migrating is not a crime, the Government is criminal”, “No one is illegal, down the walls and borders” and “The LGBT community too migrates, we seek respect and freedom ”.

Mayte ayala
Ask for what you want, but in your country there is nothing here for people who come kicking doors, Mexico owes you nothing

In a peaceful manner, the protesters arrived at the facilities of the United States embassy to demand that their rights be respected and called for an end to the violence against them since during their journey through Mexico they had clashes with representatives of the National Guard (GN) and authorities of the National Institute of Migration ( INM ).

They recalled that they traveled more than 1,600 kilometers in Mexican territory in search of reaching the United States to improve their living conditions, although on the way they were reduced in number because some accepted the government’s offers to regularize them and give them work.

Danny Lopez
Mexicans, we have been doing marches for years, we demand that our rights be respected and we seek better support and more security and even so, MUCH HAVE NOT BEEN ACHIEVED that we say 🤣🤣🤣 it would be the last straw if they are going to pay attention to and still want to be paid for walking around our country.
In short, hypocrisy, that is what they must do in their country with their own government, do they prefer to risk their family to go to a country that is even more racist. The US do they really think they will do better that way? That they go to demand rights and support from their own government and NOT HERE

Mothers of disappeared migrants took advantage of the moment to ask that the lives of people who migrate “through this territory and throughout the world” be respected.

They also demanded that they be allowed access to countries like Mexico to search for their children and demanded that no disappearance or death go unpunished.

Yuly franco
What respect. Q return to your land there, ask for respect when invading a country that does not belong to you, you do not deserve respect

They pointed out that people are forced to leave their countries mainly due to the difficult living conditions and violence they suffer in their places of origin and for the mere fact of wanting a better life they continue to migrate.

Delfido Marroquin
you want respect, do not block roads in another country.

The caravan mostly made up of Central Americans and Haitians, arrived in Mexico City on December 13, 2021, after leaving the city of Tapachula, Chiapas on October 23.

Since their arrival in CDMX, the activity of the caravan was intense, as they met with the president of the National Human Rights Commission ( CNDH ), Rosario Piedra, as well as with capital authorities, with whom they agreed on the regularization of those close to 500 members of the continent and allow the passage to the north to those who wish to continue their route.

Mexico is experiencing one of the largest migratory waves in its history. From January to October, the country has intercepted 228,115 people and deported another 82,627, figures that had not been seen for more than 15 years.

Similarly, refugee applications have also broken records. From January to October, the country has received 108,195 petitions.

Tourists will spend 1.8 billion dollars on the Day of the Dead in Mexico