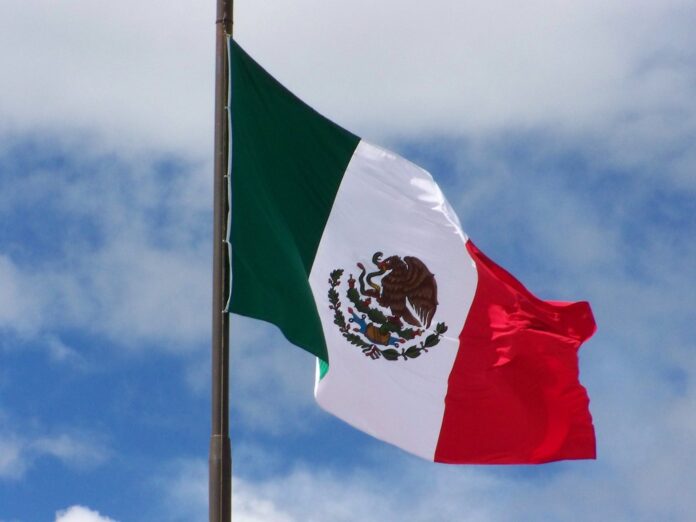 The Mexican flag has a vertical tricolor format in red, white, and green with a shield in the center of it. The country adopted these colors during the battle for independence. The general design of the flag was used since 1821, but the coat of arms was only included in 1968. Although the proportions of width and length of the flag and the coat of arms have been modified on numerous occasions, the latter always has had a similar appearance (an eagle with a serpent). The meaning of the three colors has also changed over time.

The current Mexican flag is a variation of the flag that Venustiano Carranza approved in 1916. The eagle on the coat of arms was changed from frontal to a lateral position. Before adopting its current flag, the government used several official flags. These had three bands of color and the only thing that changed over time was the shield that we named earlier. Mexico adopted its current flag on September 16, 1968. One of the critical reasons for the flag change was because Mexico City was selected to host the 1968 Summer Olympics. The country also legally abandoned its merchant insignia the same year because, without the coat of arms, its flag looked very much like the Italian one.

Meaning of the colors of the flag

Previously, the red band represented the union of Europeans and Americans, the white symbolized religion, and the green represented independence. The meaning of these colors changed during the secularization of Mexico under President Juárez. Currently, the red stripe represents the blood of their heroes who lost their lives while fighting for their independence, the white signifies unity, and the green represents hope.

The coat of arms of Mexico

The Coats of Arms represents a myth that shows how the Aztecs selected the site where they built their capital, Tenochtitlan. These were the nomadic peoples led by Tenoch. The legend says that Tenoch was contacted by Huitzilopochtli (his god of war) to settle in a place where they would find an eagle eating a snake on a prickly pear. The place where they saw the eagle was quite inhospitable, it was a marshy region that was located in the middle of three lakes, but they also built the city of Tenochtitlán and settled.

History of the Mexican flag

The history of the Mexican flag is long and historical. Dating back over 600 years, the Mexican flag tells a unique story, with strong and diverse people and their quest to find a home. Celebrated annually on Mexican Flag Day, February 24, this symbol of freedom and heritage is a sign of one of the most colorful cultures in the world.

In the early 1300s, Mexicans were a wandering group looking for a home as they had been expelled from other communities. They believed that the almighty god Huitzilopochtli would guide them to their homeland. They looked for the sign of an eagle sitting on a prickly pear until finally, that sign arrived. It was an unlikely place: a small island in the middle of a swampy lake.

However, resourceful and dedicated, the Mexicans began to dry up the land and build on it. Eventually, this effort expanded and became Mexico City. According to history, this situation became the symbolism of the Mexican flag, which features green, white, and red vertical bands, and the symbol of an eagle on a cactus.

Some elements of the flag emerged later. For example, many sources report that the color green, white, and red first emerged in 1821 and was called “the Sierra. ” Puebla and Veracruz gave this name to the flag. The colors were not officially adopted by Mexico until April 14, 1823.

While the symbolism of the eagle, snake, and cactus is clear, there is much more speculation about the meaning of the colors of the Mexican flag. Until 1821, various communities throughout Mexico displayed different flags. In 1821, however, the first official flag was displayed. It featured the modern green, white and red vertical stripes, although its eagle wore a crown.

By 1821, the Empire associated with the flag was abolished and a second official flag was launched. This flag also featured the colored stripes but featured an eagle with a serpent in its talons and no crown. The current flag of Mexico was launched in 1984. This flag, of course, kept a unique Mexican history and the colors of previous flags. By then, however, they had come to represent different things.

Differences between the Mexican and Italian flags

Protocol for the use of the flag

When the Mexican flag is used in a public place, all soldiers who are in uniform must salute it while civilians place their right hand on their chest right in front of their heart. The hand is usually laid flat with the palm facing down. If the president is the head of the armed forces, he should salute the flag. The flag must be displayed each time the national anthem is sung or played.