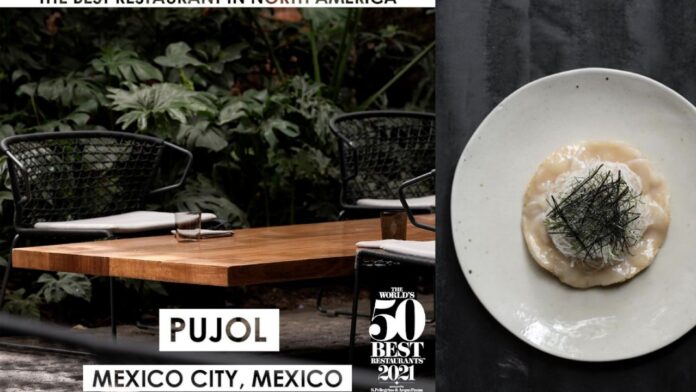 The list of the 50 best restaurants ranked chef Enrique Olvera’s restaurant at number 9 as the leader.

The best restaurants in the world of 2021 have been announced. The organization of the 50 Best Restaurants ratified, among its results, the Mexican restaurant Pujol as the best in North America, placing it in the ninth position in the count.

With this position among the best 50 around the world, chef Enrique Olvera’s restaurant returns to the Top 10 of the prestigious gastronomy list. The results were announced at a special ceremony held for the first time in Antwerp, Belgium.

The quality and innovation within Pujol’s cuisine leads them, once again, to be the favorite among the select group of expert judges in the gastronomic world. This year’s edition of the 50 Best Restaurants comes after a year ago the ranking could not be made due to the issue of the pandemic.

In the last edition of Latin America’s 50 Best Restaurants 2020, Pujol also added important recognitions by being in the number five position, in addition to also obtaining recognition as the most sustainable restaurant in Latin America.

More than two decades support the quality of Pujol. The contemporary Mexican gastronomy restaurant enhances the local product in its creations; Corn, quelites, chili peppers, beans, are elements that stand out in their creations and that offer an unparalleled experience to diners.

Those who visit it will be able to choose between two options: the tasting menu and the Omakase. While some focus on dishes like their famous 2,575-day old mole madre. the other shows a range of flavors in tacos, gorditas and other delicacies of Mexican cuisine.

Not only Pujol stands out among the best restaurants in the world, but others also located in the Mexican territory managed to make the list. Among the top 50 places is chef Jorge Vallejo’s restaurant, Quintonil, in position number 27, while in positions higher among the first 100 are the restaurants Sud777 in position 56 and Alcalde in place 68.

On the other hand, in the edition of the 50 Best Restaurants 2021, the restaurant Noma of chef René Redzepi led the list in the number one position; the Chilean restaurant Boragó obtained the “Sustainable restaurant award”; Chef Pía León, from Peru, was placed as “Best female chef” and Will Goldfarb from Room 4 Desserts from Indonesia was recognized as “World’s Best Pastry Chef”.