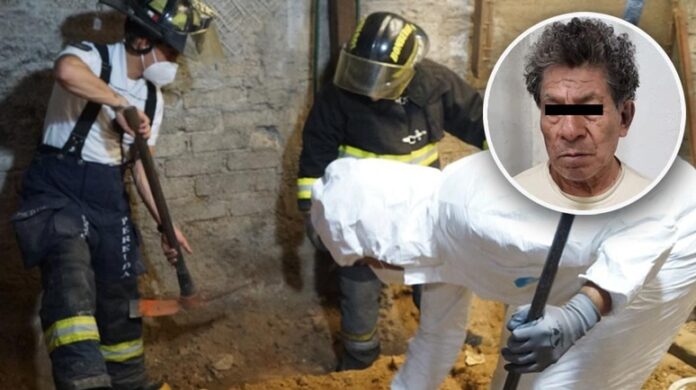 ATIZAPAN, STATE OF MEXICO, (May 19, 2021).- Staff of the Attorney General’s Office of the State of Mexico (FGJEM) managed to arrest a man identified as Andrés “N”, 72 years old, who, according to the investigation, would be a serial killer with 20 years murdering women in the municipality of Atizapán de Zaragoza.

Andrés “N” is investigated for his participation in the 34-year-old Reyna “N” femicide, apparently, his sentimental partner, who was reported as missing and for which an Odyssey Alert was issued on May 15th.

The remains of this victim were found dismembered in a search in the basement of the home of Andrés “N”, in the Lomas de San Miguel neighborhood, in the municipality of Atizapan de Zaragoza, Estado de México.

In addition to this and derived from the fieldwork carried out, it was also possible to locate skeletal remains in this place, as well as credentials and women’s clothing, footwear and bags, in addition to other indications such as notebooks with several names, makeup and video cassettes.

#FGJEMInforma | Agents of the # FiscalíaEdoméx completed an arrest warrant against Andrés “N”, 72, who is being investigated for his probable participation in the femicide of a 34-year-old woman in # Atizapán.

The victim’s remains were found in a search at the home of Andrés “N”, in Col. Lomas de San Miguel.
It was also possible to locate skeletal remains, voter credentials, women’s clothing, footwear, and purses, as well as other pieces of evidence.

The search was led by FGJEM personnel, and agents of the General Coordination of Expert Services who participated along with the Investigative Police and the Public Ministry of the Femicide Prosecutor’s Office, as well as Firefighters and K-9 units belonging to the Municipal Police of the State of Mexico.

The remains of the victim and the skeletal remains found buried in one of the rooms of his home, were transferred to the premises of the prosecution, where they will be subjected to various expert tests in order to be identified.

Due to these facts, the FGJEM asked a judge for an arrest warrant against the main suspect, which was completed, for which reason this individual was admitted to the Tlalnepantla Penitentiary and Social Reintegration Center, where he will remain until his legal situation is defined.

The State of Mexico prosecutor’s office indicated that given the characteristics of the evidence and findings in this place, the possibility of finding the remains of other victims in this man’s home is not ruled out.

He also pointed out that the proceedings in the place will continue to search for other signs and more possible remains since several areas of the house have yet to be analyzed.

Andrés “N” murdered and cut up his sentimental partner in Atizapán, Edomex

According to the first police reports, it was last Friday, May 14, at approximately 12 noon, that Reyna entered Andrés’s house, located in the aforementioned municipality.

THE FILMED ALL HIS CRIMES
The ESTADO DE MEXICO ATTORNEY GENERAL’S OFFICE found at least twenty videocassettes with recordings of the murders committed by Andrés Mendoza in his house. They found sectioned women’s bodY PARTs, skulls, hair, as well as cutting tools.

After having stayed for a while in the building with Andrés, the woman told him that she did not want to have anything to do with him anymore, so he began attacking her with a knife, causing several wounds to her chest.

After taking her life, the subject began to cut up the body of his victim with a machete and a knife, to later put the parts in plastic bags and throw away the remains.

The police also found three voter credentials inside the home of the alleged serial killer, of which one corresponds to a woman from Monterrey who had been reported missing since 2019 and who lived in the municipality of Atizapán de Zaragoza.

Relatives of the woman, named Rubicela, had notified her authorities of her disappearance but had not received any news until this day when the investigating police found her INE credential at the home of the multi-murderer.