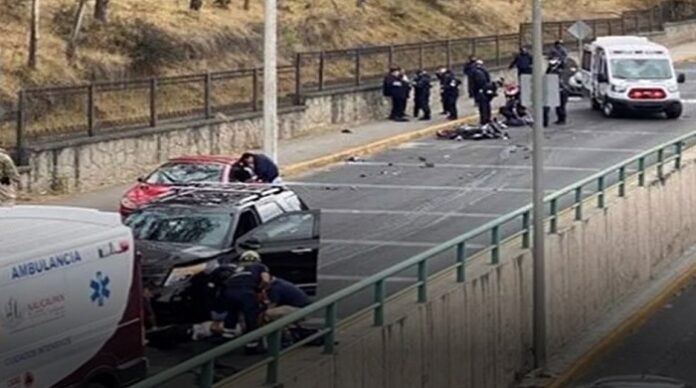 Naucalpan, State of Mexico.- A motorist was threatened by two men who were traveling on a motorcycle, after leaving the bank in the San Mateo area, in Naucalpan, Estado de México; before the alleged criminals could take a shot at him, he ran them over with his SUV on San Juan Totoltepec avenue.

Emergency forces and police officers received the call and search alert of two thieves who were on a motorcycle, who allegedly threatened a motorist to deliver a large sum of money, which he had just withdrawn from the bank.

However, the driver of the black SUV rammed the two subjects who were traveling on the motorcycle at high speed, on San Juan Totoltepec avenue, after crossing López Mateos avenue, in front of the Mega shopping center in the San Mateo neighborhood.

One of the motorcyclists was injured, he was treated by paramedics from Naucalpan and taken to a hospital, while municipal police officers detained the second man and transferred him to the Public Ministry of the Attorney General’s Office of the State of Mexico.