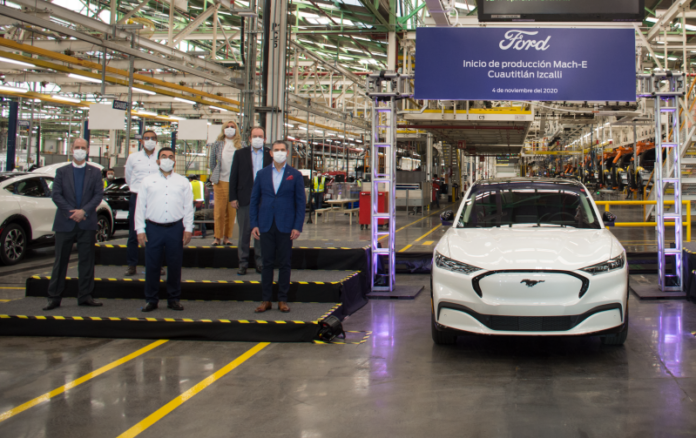 The new vehicle that Ford has assigned to Mexico will share an electrified platform similar to the Mach-E, so producing it at the Cuautitlán plant will provide manufacturing efficiencies.

Ford plans to produce a second electric vehicle at its plant in Cuautitlán, State of Mexico, where it already produces the Mustang Mach-E. This news has not been well received by the United Auto Workers (UAW), the largest auto union in the United States and which represents an important faction of the assembly plant’s workers.

Gerald Kariem, UAW vice president, said in a letter to its members that the company had recently informed the union that it was relocating manufacturing of a next-generation vehicle to Mexico.

“Unfortunately, Ford Motor Company has decided that it will not fulfill its promise to add a new product to OHAP (a plant in Ohio) and instead intends to build the next generation vehicle in Mexico,” the document states.

It is not the first time that the union has complained that US manufacturers assign new models to Mexican plants. At the end of 2019, the UAW also claimed General Motor for its “lack of commitment” to build new vehicles in its US factories and that, instead, it would have assigned the Mexican plant of Ramos Arizpe to produce the Blazer model. A claim similar to the one now facing the Blue Oval Company.

Ford was not immediately available for comment on whether the UAW lawsuits could affect its plans.

The new vehicle that Ford has assigned to Mexico will share an electrified platform similar to that of the Mustang Mach-E, so, according to the manufacturer, producing it at the Cuautitlán plant “will provide manufacturing and engineering efficiencies.”

Although Ford has invested nearly $ 11 billion in several of its North American plants, including one in Mexico and two in the United States, to produce its first electric models, the US union does not welcome Ford’s allocation of a second vehicle. to Mexico instead of choosing Ohio.

During labor negotiations in 2019, Ford pledged to spend $ 900 million on the factory, to refit it for a new model that it would begin building in 2023.

“We hope that the company will fulfill its contractual commitments with this membership and, when it does not, we will take action,” Kariem wrote in the letter to Ford that has been replicated in several US media.

Ford said in a statement Wednesday that it is committed to the Ohio factory and highlighted recent investments made in the United States.

The Mach-E was Ford’s first electric vehicle to enter production. The initial plan was to produce it at the Flat Rock, Michigan plant, but at the end of 2017 the company announced its change of plans: to send production of its new battery-powered all-electric SUV to Mexico and would focus on the production of autonomous vehicles in the Flat Rock Assembly Plant. “This will allow us to offer significant savings, capital and physical space,” Ford said at the time.

In addition to a first electric SUV, the manufacturer developed a pickup and a battery-powered van. In recent months, it announced that its Kansas City assembly plant will build the new E-Transit beginning in the last quarter of 2021. The all-electric F-150, to be assembled at a Dearborn, Michigan plant, will arrive in mid-2022. .

Ford said in early 2018 that it would develop 16 electrics and 24 hybrids by 2022. While the first three models hit the sales floors, the US automaker is already preparing a second wave of models that will enter production in the next three years.

In addition to the one that has been assigned to Mexico, there will also be another model for Canada. Ford is investing 1.8 billion Canadian dollars (1.35 billion US dollars) to transform its assembly complex in Ontario, Canada, into one that will assemble next-generation battery electric vehicles starting in 2024.

“Our electric vehicle business is a dynamic source of growth,” John Savona, Ford vice president of North American manufacturing, said in a statement. “We are preparing for a profitable business now and in the future.”

Ecatepec policemen fired for having sex in the patrol unit (video)