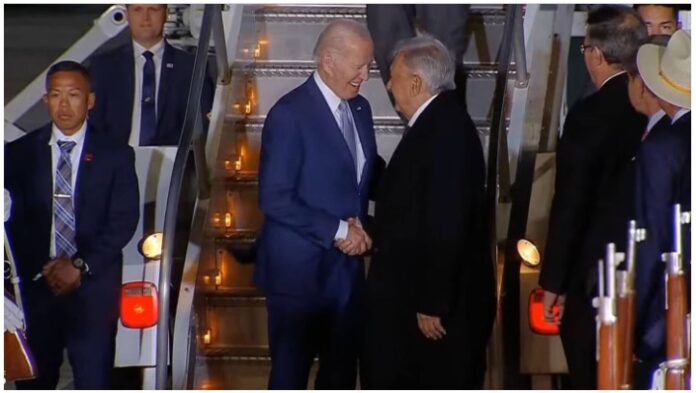 Biden is meeting with AMLO and Justin Trudeau on the occasion of the North American Leaders Summit in what is his first visit as US president to Mexico.

The President of the United States, Joe Biden, visits Mexico to meet with his counterparts, Andrés Manuel López Obrador and Justin Trudeau at the North American Leaders Summit, also known as the “Three Amigos” meeting.

Biden was at the El Paso, Texas border, where he learned first-hand about the conditions of migrants and officials, this while illegal entry into the country skyrockets and the Republican party threatens to investigate its border management.

Biden sends a message on migration

Shortly after his arrival in Mexico, the President of the United States, Joe Biden, sent a message on social networks: “Our problems at the border did not arise overnight. And they won’t be resolved overnight. But we can come together to fix this broken system. We can secure the border and fix the immigration process so that it is orderly, fair, safe, and humane,” he wrote.

AMLO and Biden get to ride ‘The Beast’

Both leaders boarded Joe Biden’s presidential limousine at 7:40 p.m. heading to the Intercontinental Hotel in Polanco, with a route from the municipality of Tecámac, State of Mexico, to the Miguel Hidalgo mayor’s office, in the country’s capital.

At 19:44 ‘La Bestia’ or The Beast left the AIFA and a contingent of citizens was waiting for them to greet the leaders, with Mexican and American flags, as well as green, white, and red confetti.

Joe Biden left his plane at 7:36 p.m. and was received by López Obrador, the Secretary of Foreign Relations, Marcelo Ebrard, and the United States Ambassador to Mexico, Ken Salazar.

The president arrived at around 7:20 p.m. this Sunday, January 8, at the Felipe Ángeles International Airport (AIFA), while López Obrador is already waiting to receive him.

Joe Biden arrives in his aircraft called Air Force One, while López Obrador waits on the steps.