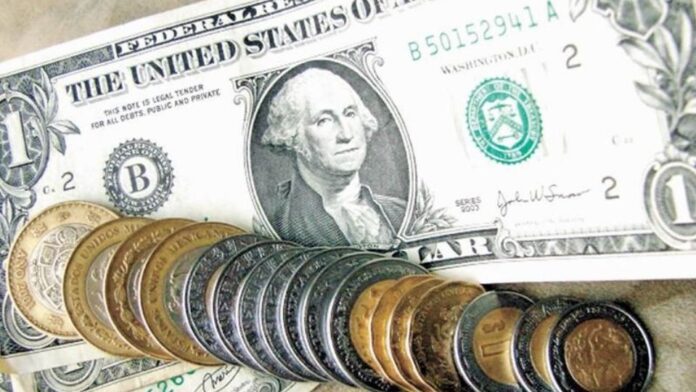 Peso falls against the dollar from its best level in six weeks; outline monthly progress

When starting operations, the price of the dollar today, Monday, was up to 20.39 pesos in banks. Meanwhile, the interbank exchange rate stands at 19.89 pesos per dollar, with a gain of 0.53 percent.

The peso depreciated, after two days of gains that took it to levels not seen since mid-September, as investors braced for a much-anticipated Federal Reserve monetary policy meeting this week.

How is the exchange rate going?

According to the Banco Base report, the peso begins the session with a depreciation of 0.51 percent or 10.1 cents, trading around 19.90 pesos per dollar, with the exchange rate touching a minimum of 19.80 and a maximum of 19.91 pesos.

The depreciation is the result of a strengthening of the US dollar of 0.61 percent against its main crosses, advancing for the third consecutive session.

The strong dollar is due to a combination of two factors:

first. Risk aversion due to the publication of unfavorable economic indicators for growth and inflation.

In China, the manufacturing PMI indicator for October was published, falling from 50.1 to 49.2 points and below the expansion threshold of 50 points.

A further deterioration was seen for the services PMI, which fell from 50.6 to 48.7 points, its lowest level since May.

The weakening is due to the fact that mobility controls related to the zero covid policy continued during the month, restricting economic activity in various regions of the country.

The indicator shows that risks to China ‘s economic growth remain, even though the economy posted stronger-than-expected growth in the third quarter.

In Hong Kong, preliminary third-quarter GDP contracted 4.5 percent in annual terms, marking the third consecutive quarter of contraction. The main factor causing the contraction was due to a 15.5 percent drop in exports of goods.

The economy contracted 2.6 percent from the previous quarter, when it expanded 1.0 percent.

In Poland, prices rose 1.8 percent monthly in October, above the estimated 1.6 percent, while inflation stood at 17.9 percent at the annual rate.

Second. There is caution in the market, in anticipation of the Federal Reserve ‘s monetary policy announcement scheduled for Wednesday, Central Mexico time.

Other indicators of economic growth for the third quarter have also been published. Saudi Arabia’s preliminary GDP grew 8.6 percent annually during the third quarter compared to 12.2 percent growth in the second quarter.

In Italy, the GDP grew 0.5 percent quarterly, above the 0 percent expected by the market, advancing at an annual rate of 2.6 percent.

In Portugal, quarterly growth was 0.4 percent, advancing at an annual rate of 4.9 percent.

Finally, in the Eurozone, the GDP grew 0.2 percent quarterly, above the expectation of 0.1 percent, while at an annual rate it grew 2.1 percent, in line with market expectations.

In the foreign exchange market, most currencies lost ground against the dollar with the exception of the Israeli shekel that advanced 0.11 percent and the Hungarian forint with 0.07 percent.

The Mexican peso is located in position 14 among the most depreciated.

In the commodity market, grains start the week with gains, boosted by Russia ‘s decision to suspend the Black Sea export deal, which raised concerns about global grain supply.

Russia’s decision came on Saturday in the wake of a drone attack by the Ukrainian armed forces on its fleet in Crimea. However, Ukraine has accused the Russian government of fabricating “sham attacks” on its facilities as a means of blackmail.

This is because Ukraine and Russia account for almost a third of world wheat exports, while they are among the world’s leading exporters of corn, sunflower oil and barley. Likewise, palm oil in Malaysia also increased by 1.64 percent.

During the session, the exchange rate is expected to trade between 19.86 and 20.03 pesos per dollar.

The Bank of Mexico ( Banxico ) registered in the previous session an exchange rate of 19.83 pesos per dollar.

ARE YOU LIVING IN MEXICO AND HAVEN’T FILED US TAXES?