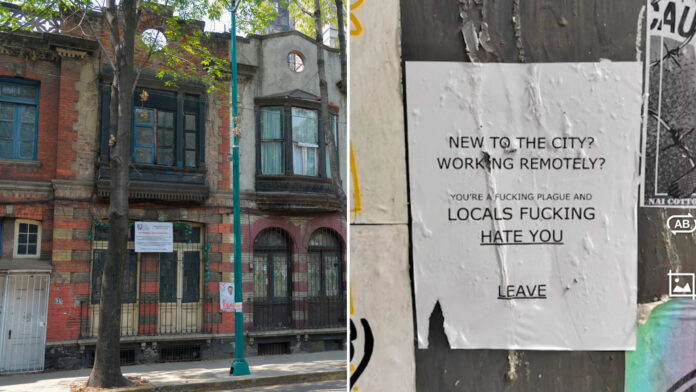 Inhabitants of neighborhoods like Condesa and Roma complain that long-term residents are being pushed out as owners increasingly choose to rent out their homes through platforms like Airbnb, where they can earn 25,000 pesos a month.

In a trendy area of ​​Mexico City, in a park surrounded by hipster cafes and restaurants, stands a figure dressed in white with hands in prayer like a Catholic statuette: the so-called patron saint against gentrification.

Sandra Valenzuela, an activist, created the statue to unite neighbors against what she sees as a growing threat to her community and others in the Mexican capital.

A wave of international visitors, predominantly from the United States, have poured into the city’s cafes, parks, and Airbnb accommodations as they work untethered by the Covid-19 pandemic to commute to the office.

Meanwhile, demand for short-term rentals in the city increased 44% during the same period, according to AirDNA, a market research company that analyzes online rental listings.

“Obviously there are a lot of advantages if you can earn in dollars and spend in pesos,” said Marko Ayling, a writer and content creator who lives in Mexico City, as he strolled through the coveted Condesa neighborhood, where “For Rent” ads are posted. they alternate with signs of elegant cafes and restaurants.

But housing activists and some researchers say the influx of digital nomads is fueling inflation and turning neighborhoods into foreign-only bubbles in a city known for stark divides between rich and poor.

Residents of neighborhoods such as La Condesa and La Roma complain that long-term residents are being pushed out as owners increasingly choose to rent out their homes through platforms like Airbnb, where they can earn 25,000 pesos (about 1,250 pesos). dollars) per month, said Rafael Guarneros, president of a Condesa neighborhood association.

The gap between US and Mexican wages means that even wealthy residents of Mexico City can find themselves excluded.

The Mexican government stopped publishing average rental rates in 2018, but a study by real estate website Lamudi found that rents in the city fell slightly between December 2020 and December 2021.

“People feel resentful,” said Juan Coronado, an architect and interior designer who lives between Los Angeles and Mexico City. “I come to live here, I don’t live for free, I help the economy,” he added while working on his laptop in a restaurant.

Although Mexico City landlords can only raise rents by up to 10% a year by law, the rules are rarely enforced. The short-term rental market has no such restriction.

“There is no way that people can sleep peacefully,” lamented Quetzal Castro, a neighbor of Condesa, who maintains that the neighborhood has become a center of noisy nightlife, which pushes friends to leave.

They are more likely to settle in residential neighborhoods and spend at local businesses, Wachsmuth said, but they also create demand for services with little benefit to long-term residents.

Ayling, from San Diego, acknowledged that digital nomads enjoy a lifestyle out of reach for most workers in Mexico City, who earn 53 pesos ($2.67) an hour on average but highlighted a bright side of the infatuation of foreigners in the city.

“They are realizing that no, it’s not just drug traffickers, violence, and poverty. There are also beautiful aspects of this country,” she said.

In recent days, social networks have been the showcase for attacks and ridicule by Mexicans on foreigners who live in La Condesa or La Roma. Some people have denounced the speech and allegations of Internet users as xenophobic, due to posts on Twitter with expressions such as “time of shooting in the air in La Condesa to scare the gringos”, and “remember that attacking Americans in Condesa does not count as a hate crime.”

But the phenomenon of gentrification is not exclusive to these neighborhoods, nor is it only due to people from the United States, since there are also foreigners from other countries, such as China or Germany, and there are neighborhoods such as Doctores, Obrera, Tabacalera and Álamos. that now they have a location that can be considered as “privileged” and that they are taking advantage of to increase the opening of shops, restaurants and rents that are less and less accessible.

What makes them stay?

For many foreigners who live in Mexico City and work from home, a modality that increased rapidly with the pandemic and many maintain, it has turned out to be cheaper to continue renting in Mexico than to move back to their countries. In addition, their salaries continue to be in dollars or euros, so their income has not been affected. In an interview with El Sol de México, Armando Rosales García, president of the Representation of the Mexican Association of Urban Planners, explained this phenomenon:

“Those who work in large corporations or international organizations that are located in the Reforma or Santa Fe area are high-level executives and their salary is equivalent in dollars or euros, so the purchasing power in Mexico is much higher. A rent in Roma or Condesa is around two thousand dollars, while an average rent in New York or Manhattan is double that. The rents here are cheaper, that is why the visibility of more population with a foreign appearance in areas of Roma and Condesa”.