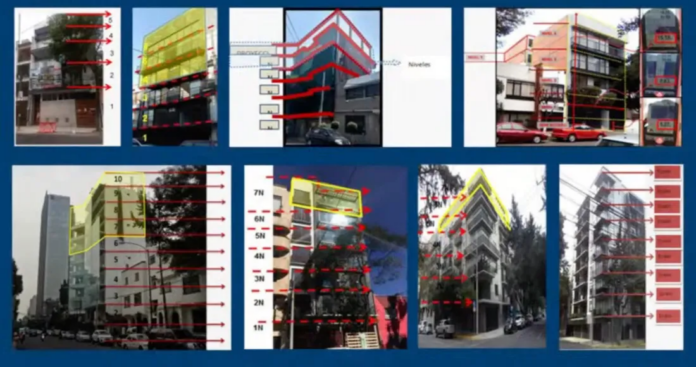 The spokesman gave two examples: one located on Philadelphia Street, in the Napoles neighborhood, where it was detected that the 10-story building had only six allowed for construction; the other, located in Boston, Nochebuena neighborhood, was built with seven floors, when he was barely authorized to build three, that is, more than most of the property would be illegal.

The Mexico City Attorney General’s Office (FGJ-CdMx) has detected until the end of August a total of 69 properties in the Benito Juárez Mayor’s Office that would have irregularities related to the ” Real Estate Cartel” that operated in the demarcation in recent years, in addition to securing 46 bank accounts related to former public servants.

“In relation to the investigation of the organization focused on real estate, possibly related to acts of corruption in the Benito Juárez Mayor’s Office, this Prosecutor’s Office reports that to date a total of 69 properties have been detected with possible irregularities in their construction, which were built between 2014 and 2021”, revealed this Monday the Spokesman of the FGJ-CdMx, Ulises Lara.

“These buildings violate construction regulations as a result of a possible collusion between the authorities of the demarcation and real estate companies to presumably obtain extra dividends with the construction of more levels and apartments than those allowed,” he added.

Some of these properties, Lara explained, are located on the same roads, and most of them are located in neighborhoods “with the highest added value in the demarcation”: the Del Valle, Narvarte, Nochebuena and Napoles neighborhoods.

Based on the records of the Environmental Prosecutor’s Office and the Department of Urban Development and Housing, both from the capital, “it has been confirmed that these buildings have one to seven excess levels in their construction,” Lara said.

The spokesman gave two examples: one located on Philadelphia Street, in the Napoles neighborhood, where it was detected that the 10-story building had only six allowed for construction. The other, located in Boston, Nochebuena neighborhood, was built with seven floors, when he was barely authorized to build three, that is, more than most of the property would be illegal.

“At the time, the authority in charge of verifying compliance with construction regulations issued various recommendations to the Benito Juárez Mayor’s Office, to initiate administrative procedures to sanction construction companies by demolishing excess levels, as well as for the demarcation to take administrative and/or criminal actions against the public servants involved,” explained Lara.

However, the authorities of the Mayor’s Office “possibly failed to comply with the recommendations and to execute their powers to enforce their regulations on the matter during these periods.”

Lara also revealed that the real folio of a property in the city of Angelópolis was secured, which adds up to more than 40 properties possibly related to former public servants in Benito Juárez.

On August 4, the capital prosecutor’s office announced that Luis Vizcaíno Carmona, who was general director of Legal and Government in the Benito Juárez Mayor’s Office between 2009 and 2016, was linked to a process for the crime of enrichment and is being investigated for his alleged relationship with the “Real Estate Cartel”.

Luis Vizcaíno was arrested by elements of the Investigative Police in compliance with an arrest warrant against him, the FGJ-CDMX reported on July 30.

The unit also captured the former director of Works of the Benito Juárez Mayor’s Office, Nicias René Aridjis Vázquez, whom he pointed out as one of the leaders of the so-called “real estate cartel” in that demarcation.

Aridjis Vázquez was Director of Works and Urban Development between 2006 and 2018, who owns various companies in the construction industry. He is pointed out as being responsible for the excessive construction of real estate in the demarcation and for operating the “Real Estate Cartel” with other former officials of Benito Juárez, where favors were exchanged with construction companies.

The capital prosecutor’s office discovered that the former works director of Benito Juárez owns a couple of apartments in that same building, which could have been obtained as consideration in exchange for the facilities that the Mayor’s Office offered for the construction of new works, since among his powers was to ensure that the infrastructure complied with the applicable regulations.

Likewise, it proved that the conditions of one of the buildings affected during the 2017 earthquake located on Emiliano Zapata Avenue complied with all legal provisions, however, the building collapsed nine months after being inaugurated, a fact for which it was suspended. in 2020.

On August 8, during the Los Periodistas program that is broadcast on SinEmbargo YouTube channel, Alejandro Páez asked an express question about whether Jorge Romero – current leader of the deputies of the National Action Party (PAN) – was being investigated. For facts related to the “Real Estate Cartel”, Ulises Lara indicated that due to the process he could not reveal details of the investigations, but he said, the FGJ-CDMX has characters from various fields in its sights.