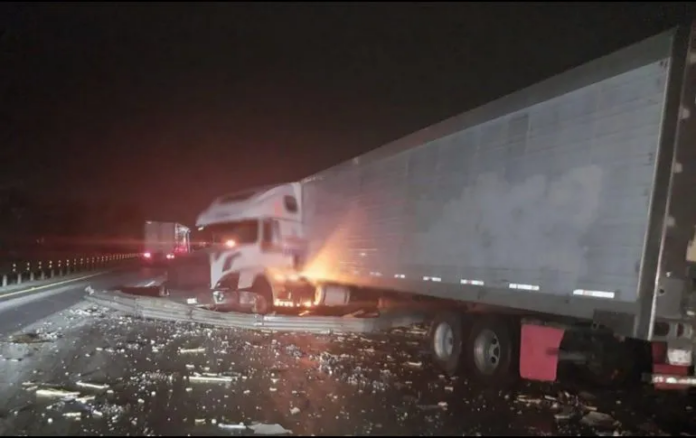 The accident generated long lines of motorists for several hours to move forward, because the three lanes were completely disabled.

A spectacular crash was recorded in the early hours of this Thursday, on the Mexico – Querétaro highway, the events occurred at kilometer 94 in the State of Mexico, so far the reason for the accident is unknown, as well as if there is injured people.

However, the first reports were released where at least three units are allegedly involved in the accident, two of them cargo, there are still no details of the last vehicle that was in the accident, since it was completely destroyed, after the incident next to the retaining wall.

In turn, the accident generated long lines of motorists for several hours to be able to advance, more than anything, those who were heading to Mexico City, because the three lanes were completely disabled.

Later, elements of the National Guard Highway Division came to cordon off the area and speed up traffic. While emergency units were responsible for removing the vehicles and cleaning the road.

Up to 20 kilometers the line of cars that were stranded on the Mexico- Querétaro highway was extended, due to the recorded road accident. Through its networks, Federal Roads and Bridges (Capufe) announced the closure of circulation due to the maneuvers for the withdrawal of the units.

Images and videos were spread on the Twitter social network showing the endless line of cars on the road. In one of the videos, you can see a group of trailers that are stranded.

After more than nine hours of damage, circulation on the Mexico-Querétaro highway remains partially closed.

An accident involving a trailer, a tow truck, and two private vehicles was recorded at kilometer 151 of the Mexico Querétaro Highway.

In the accident that occurred in the direction of Querétaro, no injured persons were reported, only material damage to the participating vehicles.

A torton truck was allegedly hit by a trailer in the rear, causing it to be projected into the retaining wall of the highway, which is what stopped it.

While a Nissan Sentra-type vehicle and a pickup truck, also collided in the same mishap, were impaled on the concrete layer of the road, at the time they collided.

It was not known what happened, because the members of the National Guard were barely aware of it, while firefighters and Civil Protection flagged the highway to avoid another mishap.

Once the tow trucks arrived, the vehicles involved were removed from the scene to release the road lanes that were occupied by the accident cars.

Accidents and road delays have become such a problem their is a dedicated Facebook page for up-to-the-date updates, click here TRÁFICO CARRETERA MÉXICO – QUERÉTARO