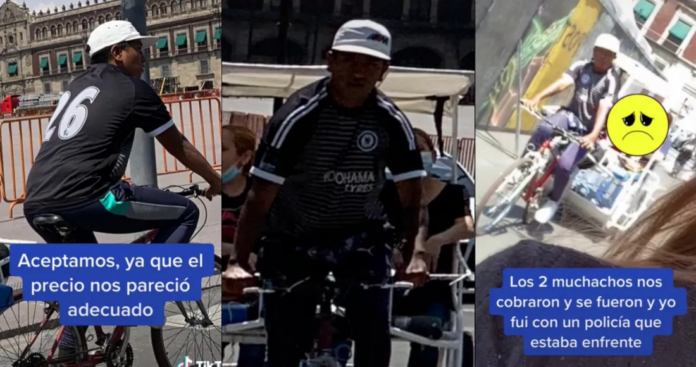 At first, they had offered the trip for 300 pesos and ended up charging more than seven times the amount; however, by filing a complaint with the capital police, the family managed to recover 300 pesos.

Mexico City.- A family from Guadalajara, Jalisco, who visited Mexico City, was scammed by two biciicab drivers who offered him a tour of the Historic Center.

Through her TikTok account, the tourist @ezli denounced the swindlers they did to her and her family on their tour through the capital’s Zócalo, when both subjects offered them a tour for 300 pesos, which ended up costing almost six times more.

“We are tourists. We don’t know how abusive these types of people tend to be; This only leaves us with a bad experience and clearly zero desire to take this type of tour again, “justified the young woman.

According to their recording, the family decided to hire two services because there were six people who would go for a tour through various points in the capital where they would get off the units to take photos.

Although one of the aunts wanted to pay before leaving to visit the Zócalo, the Post Office of Mexico, and Reforma Avenue, they asked her to pay at the end of the tourist service.

The young tourist sought help from a police officer who questioned whether there were recordings of the agreed price; having no video, they decided to wait for the drivers to negotiate with them.

Finally, the police intervened and managed to get the swindlers to return 300 pesos of the total; the video where the tourists informed of the swindle already has more than 500 thousand reproductions.

VivaAerobus cancels flights to Ciudad Juárez due to cartel violence