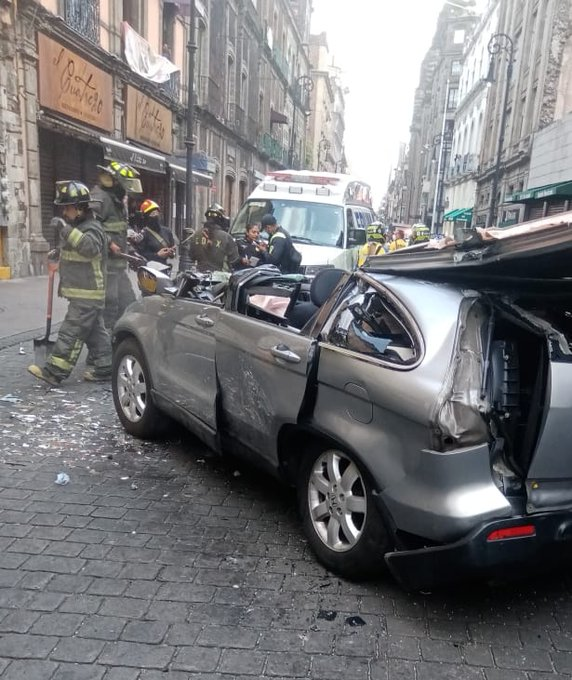 The Secretariat of Comprehensive Risk Management and Civil Protection of Mexico City reported that a vehicle fell from the roof of a parking lot and after that mishap, the driver, identified as a  valet parking employee,  died.

“Emergency services work in Isabel la Católica and 5 de Mayo, Col. Centro , where a truck fell from the roof of a parking lot. ERUM paramedics confirmed the death of the driver. Caution when driving in the area,” he reported.

The  Center for Command, Control, Computing, Communications and Citizen Contact of Mexico City (C5) reported separately that emergency teams are working on the crash.

The C5 indicated that motorists can take Eje Central Lázaro Cárdenas and Donceles as road alternatives .

The  Heroic Fire Department of Mexico City also went to the accident area to verify the situation and keep the public informed.

“In a follow-up to the fall of the vehicle registered in the  Cuauhtémoc Mayor ‘s Office, it is reported that unfortunately one person was killed; we continue working at the scene,” he said.

The police report indicates that the man was accommodating the vehicle in the parking lot on the roof of the building and due to a miscalculation he reversed and fell.

The truck was upside down, so paramedics from the Emergency Medical Rescue Squad (ERUM) arrived at the site and confirmed that the employee had died of polytrauma.

The man was identified as Paulino Muñoz Ventura, 50 years old, who was left inside a Honda CRV plates 890-VCN.

The Attorney General’s Office of Mexico City became aware of the events, consigning them to the CUH-6 Public Ministry agency.