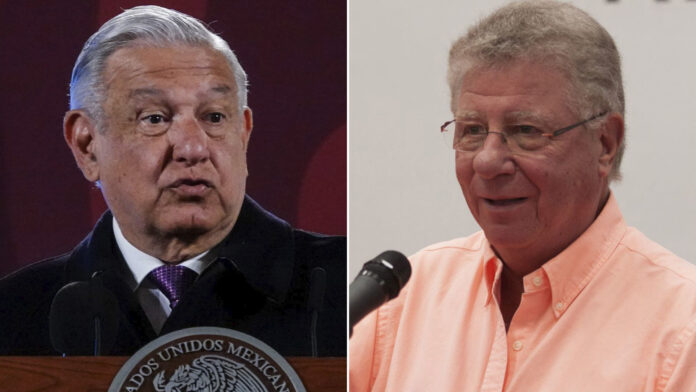 President López Obrador denied what was said in a fragment during Carlos Alazraki’s interview program where there was talk of an alleged arrival of Venezuelans through the AIFA without going through migration; “He is extremely conservative, he is like a Hitlerian,” said AMLO.

The Jewish Community in Mexico condemned the use of the term “Hitler” used by President Andrés Manuel López Obrador to refer to the publicist and driver Carlos Alazraki.

Through a statement, the Central Committee of the Jewish Community of Mexico and the Israeli Tribune pointed out the President’s failure to use the term “Hitler” during the morning conference this Wednesday.

“Any comparison with the bloodiest regime in history is regrettable and unacceptable,” the statement concluded.

During the “morning” of this Wednesday, President López Obrador projected a fragment of Carlos Alazraki’s interview program “Atypical Te Ve” in which the former deputy of the Institutional Revolutionary Party (PRI) Beatriz Pagés Rebollar was, where they spoke about the new Felipe Angeles International Airport (AIFA).

“Very strange things are happening in the ‘Felipe Angeles’ because Venezuelan planes, loaded with Venezuelans, are also arriving in Mexico without going through migration,” said Pagés Rebollar.

Given this, President Andrés Manuel López Obrador used the term “Hitler” to refer to Alazraki.

“He is extremely conservative, he is like a Hitlerian. Sometimes, I think I once commented on it, it is thought that because Hitler no longer exists or Stalin no longer exists or Franco or Mussolini no longer exists, Nazi, fascist thought, Stalinism, the rancid Spanish right has already disappeared. No, that exists”, he declared during the morning conference.