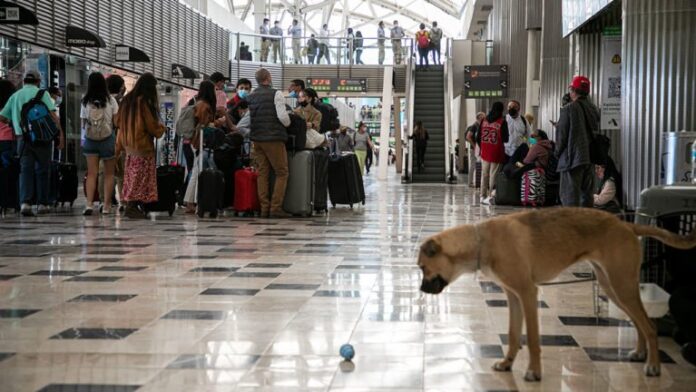 President López Obrador said that behind the diffusion of AICM failures there is a campaign of those who oppose the AIFA, as well as resistance from airlines.

According to various complaints, passengers have to face long queues at immigration, delays in baggage delivery, and now the restriction to use taxis via digital platforms, Uber and DiDi, which generates long lines among users who want to get away from the airport terminal as the only option is the transport service authorized by the AICM.

“It is a conjunction of several factors, of course, the background is the disagreement of those who do not accept the fact that the Felipe Ángeles airport has been made, it bothered them very much and they take great pains to block and exaggerate the note.

“The Mexico City airport has been saturated on other occasions and does not have or has not had the same diffusion as now. To this, we must add that they are making changes inside the airport. The Secretary of the Navy arrived, there was smuggling, there was the introduction of drugs and this surely did not seem to those who had control of these activities, ”said the federal president at a press conference from the National Palace.

Similarly, he charged that there are certain airlines that have refused to use the AIFA infrastructure because they had important interests in the Toluca project and participated in the degradation of the AICM and the Toluca airport.

Although he acknowledged that the AICM is experiencing saturation problems in its two terminals, the head of the federal Executive said that his administration is intervening in the facilities to improve the infrastructure and its services.

However, he considered that the problem of the air terminal has become politicized, so the Navy will continue to intervene in security matters.

“We are already taking measures and we are going to finish putting order. Also out of disagreement, there are campaigns to say that the fault lies with the sailors or customs or that it is an instruction from the president. Propaganda has been made but it is because of all these elements.

“Today measures will continue to be taken because the fact that the Navy is there was a decision, but it has nothing to do with the AIFA, it has to do with greater vigilance, security and progress is being made in that and that is what those who have driven to the airport for a long time like it”, he added.

Regarding the prohibition of the operation of taxis by digital platforms, the president assured that he was not aware of the restriction but offered to attend to this case.

“I don’t know why they made that decision, we seek to solve problems and help people, however, we have to be facing vested interest groups, large and small mafias, corruption, smuggling, many vices of the neoliberal model that we inherited.”

Forbes Mexico published that in the midst of a war to curb the use of private transportation applications, such as Didi and Uber, outside the Mexico City International Airport (AICM), the property’s taxi dealers have incurred in delinquency and face a greater number of lawsuits for non-payment.

As of June 26, 2022, taxi concessionaires owe 130 million 832 thousand pesos and face a dozen lawsuits for non-payment of services and rent of spaces and premises occupied inside the airport, reveals information to which Forbes Mexico had access