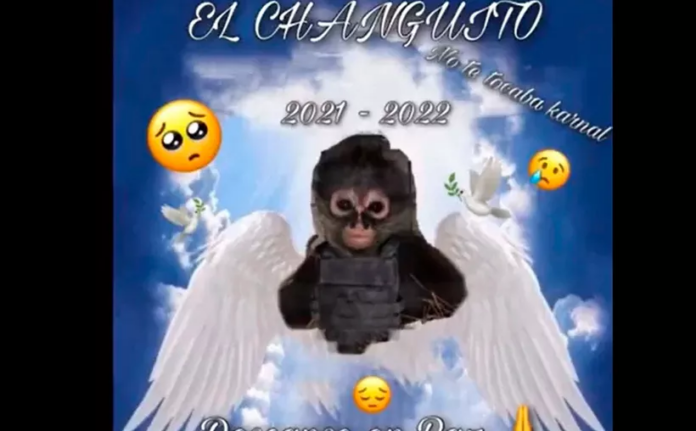 A confrontation in Texcaltitlán, State of Mexico, left 10 people dead and a dead spider monkey.

The confrontation in Texcaltitlán, State of Mexico, between elements of organized crime and local police officers left 10 people dead and a spider monkey that belonged to the people identified as criminals. After this, a corrido that they composed for him went viral on social networks and says “it wasn’t the monkey’s turn.”

According to the Attorney General of the State of Mexico (FGJEM), a spider monkey died in the shooting that occurred in Texcaltitlán; The body of the primate was found on the back of its possible owner and had a camouflage uniform. All this served as inspiration for a band that composed a corrido for him.

“There are witnesses involved, of how they executed him… the changuito was not mean, but he was not timid either”, is heard in the topic that has become viral on social networks such as Facebook and Twitter. In the short theme, they affirm that the monkey is on his way to heaven, but that he left a great legacy.

The authorities did not give more information regarding the spider monkey, a specimen that would have been a victim of the trafficking of species to become one of the animals of the drug trafficker. “Imagine living in Switzerland and missing out on money,” was the comment made by one of the users.

The FGJEM announced that its elements were attacked by members of organized crime in Texcaltitlán, for which they responded with “legitimate use of force.” In the scuffle, a dozen people died, four more were injured and seven were detained to be brought before the authorities.

As part of this operation, the Mexican authorities seized 20 long weapons, five vehicles, useful cartridges, and equipment such as bulletproof vests. Agents from the National Guard (GN), the Secretary of the Mexican Navy (Semar), and the Secretary of National Defense (Sedena) also attended the scene.

On the side of the security forces, three agents were injured, but not seriously. In that same place, the remains of the spider monkey were found with its possible owner, who unofficially is said to be a minor, a version that has not been confirmed by the authorities.

Video: Monkey dressed as a hit man died in a narco shootout with military in Texcaltitlán, Edomex