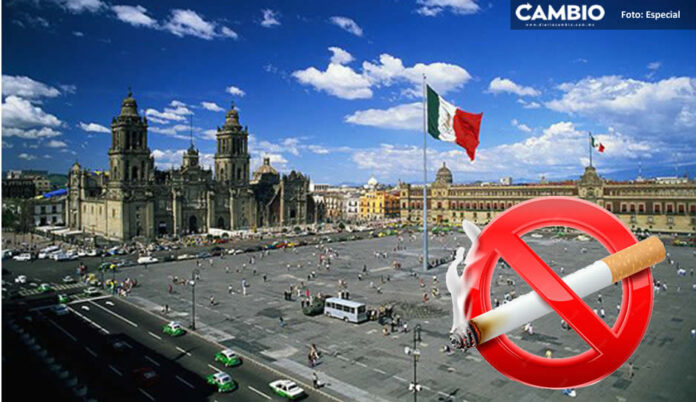 The measure comes into force as of May 31 and those who fail to comply with it may be awarded the existing fine for smoking in smoke-free spaces.

Within the framework of World No Tobacco Day, which is commemorated on May 31, the government of Mexico City announced that as of today, 11 spaces in the Historic Center will now be free of tobacco smoke so as not to interfere with the right to non-smokers.

“This is a notice issued by the Sanitary Protection Agency of Mexico City, which determines certain spaces free of smoke and other emissions that interfere with the right of non-smokers,” Martí Batres Guadarrama explained at a press conference. , Secretary of Government of Mexico City.

These are the new smoke-free spaces

The 11 smoke-free spaces in the Historic Center of the capital are:

What will the penalties be?

Batres explained that the sanctions do not arise from this notice, since it is not a decree nor is any regulation reformed, simply what is already established in the law is also applied in these areas. In this sense, the fine for smoking in smoke-free places ranges from 10 to 30 times the Measurement and Updating Unit (UMA), whose value is 89.62 pesos, that is, the penalty can range from 896.20 to two thousand 688.60 pesos.

The secretary of the capital’s government affirmed that he will initiate an information campaign to urge smokers to put out their cigarettes in the fucking references and will privilege dialogue before sanctions.

“The objective is to protect the environment, the health of the inhabitants of Mexico City and of the country and of the tourists who visit these areas and, in the same way, also of the Superior Law of Children, remembering that, in addition, here is the headquarters of the Powers of the Union and that the Historic Center is considered Cultural Heritage of Humanity and is a space where millions of people circulate who come from different parts of the world, the country and Mexico City itself.” he explained.

World No Tobacco Day is celebrated around the world on May 31 each year.

“This annual celebration educates the public about the dangers of tobacco use, the business practices of tobacco companies, WHO’s efforts to fight the tobacco epidemic, and what people around the world can do to claim their right to health and a healthy life, and to protect future generations,” says the UN.