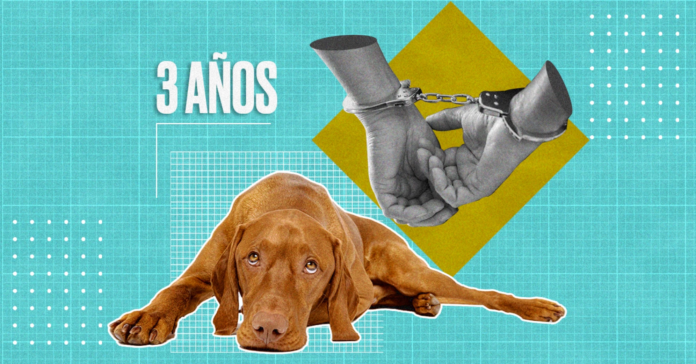 Some people have witnessed pets and companion animals being abandoned by their owners. If the initiative is approved, they would go to jail.

Surely on more than one occasion, you have seen how your neighbor mistreats their pets, or you have witnessed how they abandon them when driving through the streets of Mexico City. Sometimes, these types of events are even recorded and then shared on social networks, which further increases the outrage among Internet users.

The most recent case occurred when two subjects were arrested for the crime of animal abuse. They were accused of selling dog tacos and arrested by the Attorney General of the State of Mexico, after neighborhood complaints. Both subjects claimed to be selling tacos outside Metro Tacuba, they entered and left the place dressed in boots and aprons, but for more than 10 years they dedicated themselves to mistreating these animals and marketing them.

Despite the fact that the crime of animal abuse was proven, it does not merit preventive detention, for which the corresponding authorities imposed a precautionary measure on them to appear periodically before the State Center for Precautionary Measures.

However, cases of abuse and neglect are not referred to a specific entity. In Lozano Mexico City, it is estimated that 18,000 dogs get lost or are abandoned each year by their owners in the country’s capital, so their lives end up on the street, in shelters, and rabid.

According to Inegi data, there are at least 1,200,000 pets in CDMX, including dogs and cats, of which 30% are from domestic households and 70% are strays.

They give them away, then abandon them…

The general director of the civil association Defensoría Animal, Emmanuel Pedraza, explained that about 500,00 dogs and cats are abandoned each year in Mexico. Some of them are purchased as Christmas, Three Kings’ Day, and Valentine’s Day gifts.

“The abandonment is very notable in the months after the festivities. From March to July, the puppies begin to grow, if they survive,” he said in an interview for EFE last April.

Deputy Janecarlo Lozano proposed an initiative that provides for a sentence of up to three years in prison for anyone who abandons pets or companion animals in Mexico City.

The Morena legislator explained that this will be done through a reform of the Penal Code of the Federal District, the Animal Protection Law and the Civic Culture Law of Mexico City.

The legislator proposes to add to article 350 to the Penal Code for the Federal District. This section imposes from four months to one year in prison and from 150 to 500 days of fine to the owner or proprietor of the pet who intentionally abandons the animal that is under his care.

In its proposal, it establishes that the penalty will be doubled in the event that the aggressor of the animal ties it by its legs, limbs, or places muzzles or partial or total bagging on it.

“ This initiative proposes to sanction, through criminal and administrative channels, those who intentionally commit the heartless act of abandoning a pet. In other words, we are moving from recognizing animal abuse and sanctioning it; to typifying animal abandonment as one of the typical and punishable forms of mistreatment, ”he asserted.

He also explained that the Citizen Council, together with the Environmental and Territorial Planning Attorney’s Office, attended last year to 1,200 reports of animal abuse.

Animal abuse is punished in CDMX

Article 24 of the Law for the Protection of Animals of Mexico City considers acts of abuse, any fact and omission that may cause pain, suffering, endanger the life of the animal or affect its well-being, deprive it of air, light, food, water, space, shelter from the elements, required medical care and adequate housing according to their species.

The Senate of the Republic details that whoever mistreats and injures an animal will be punished with penalties of six months to two years in prison and fines of 3,100 to 6,200 pesos.

The penalties will be increased by 50% if the injuries endanger the life of the animal, and in the event that the animal dies, the person responsible may be punished with penalties of two to four years in prison and fines of 12,400 to 24,800 pesos, and all the animals in his possession will be removed.