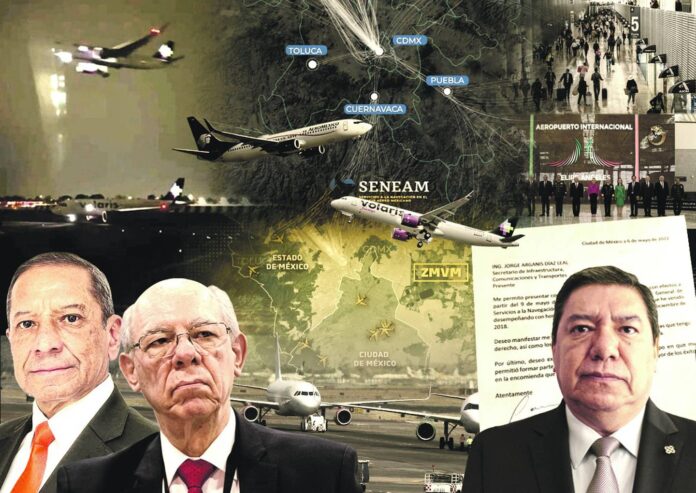 Ever since the redesign of the airspace was raised, it was said over and over again that politics had come before technical and expert decisions.

Since the redesign of the airspace was proposed and then implemented, both for the metropolitan area of ​​Mexico City and for the rest of the country, it has been said over and over again that politics had come before technical and expert decisions. And although the redesign had to be carried out, it was based on a wrong premise and to which everything had to be subject and submitted: the operation of the Felipe Ángeles airport, better known as the ‘AMLOs airport’.

After what happened in recent days, the recommendation of an illustrious Mexican, Bernardo Lisker, from the specialized firm in airport design Mitre, comes to mind, who always insisted that an airport is built from heaven to earth. And what about the unnecessary complexity of operating the AICM and the Santa Lucía airport simultaneously? Years later, he is still being accused of having served the interests of corrupt builders who sought to justify the construction of the Texcoco airport.

The truth is that, for a year, failures and lack of adequate training of air traffic controllers have been constant. All of us who have flown have experienced it. And not only passengers, because the long-awaited benefits of fuel savings for airlines have not arrived either. And let’s not talk about the shorter flight times or the safety of operations, which is now only in the hands of the crews.

As this disaster grew, Benito Juárez Airport (AICM) was intentionally allowed to continue to deteriorate and sink!, even though the metropolitan airport system that replaced NAIM as an air hub would continue to operate. Yes, just as you are reading it. While the then Secretary of Communications and Transportation, Javier Jiménez Espriú, said that the AICM had many years left in its operation, in fact, no substantial improvements were made to it to raise quality and service.

And when we all thought that the AICM could not do worse, and having suffered the ravages of almost two years of the pandemic, the current secretary, Jorge Arganis, sent as a consolation prize, nothing more and nothing less, than Carlos Morán Moguel, who was Undersecretary of Transportation with Jiménez Espriú and his underling to impose the cancellation of the NAIM.

Morán Moguel, a former employee of Mexicana de Aviación in its golden age, still sees aviation as it did 30 years ago. That’s his hallmark wherever he wants him to go. He understands little about the opening of the industry and even less about how it has evolved from being a government service to one in which the competition between airlines and airports is aimed at providing better service to users.

So, with all nonchalance and cynicism, he has been in charge of making life impossible for passengers, airlines, businesses, and service providers, with a single slogan: drive everyone away from the AICM and have them go to the AIFA. The question that leaves no one sleeping is whether he will succeed.

Errors and inefficiencies in the Seneam

It is not to add more lemon to the wound, but together with the opinion of many industry experts, I believe that not everything ends with the dismissal of the unpresentable Víctor Hernández. Rather that’s where it starts!

And if it is true that Jimmy Pons, the new Undersecretary of Transport, is determined to sweep from top to bottom, as the President says, he has a long list of officials and air traffic controllers who remain in their positions and who have a responsibility in what It happened this last weekend and in other similar events.

And from here I tell you, undersecretary, it’s not about vendettas. It is about bringing order and discipline to one of the most important activities in aviation and one that safeguards air safety. So we are still waiting for the resignation of the protégés, girlfriends, compadres, and son of the great swindler Víctor Hernández; yes, his son Alejandro is the director of the AICM control tower.

They say that this is how Captain Carlos Rodríguez Munguía thinks and acts, who also presumes to receive orders only from the Armed Forces and not from the SICT. He forgets that he has a legal mandate to carry out, from the Federal Civil Aviation Agency, an in-depth investigation of what happened at the AICM last Saturday.

We wish and hope that the director of Aviation Accident and Incident Analysis, the controversial Constantino Tercero, stops covering up officials and buddies that he has in the Seneam.

As many analysts in commercial aviation, such as Carlos Torres, have said, there is not much to look for to find those responsible. They have a first and last name, starting with the air traffic controllers who were on duty and following the entire chain of command, because you don’t mess with air safety.

What is worrying is that, in this as in other issues, the President is the one who has the last word and not the technicians and experts. The hallmark of the house is to publicly discredit its officials, as happened with Jimmy Pons’s proposal to reduce the AICM’s operations by decree and ‘in one fell swoop’ by up to 25 percent. Something that, AMLO said, was never consulted. Will be? Do we believe him? OK no!

How to put aside Diego Fernández de Cevallos‘s tweet: “Incredible criminal irresponsibility: the use of the airspace of the Valley of Mexico was decided by the Ministry of the Interior, squeezing their necks. Of course, they will blame the damned neo-liberalism for the tragedies! Poor Mexico with these rascals!”