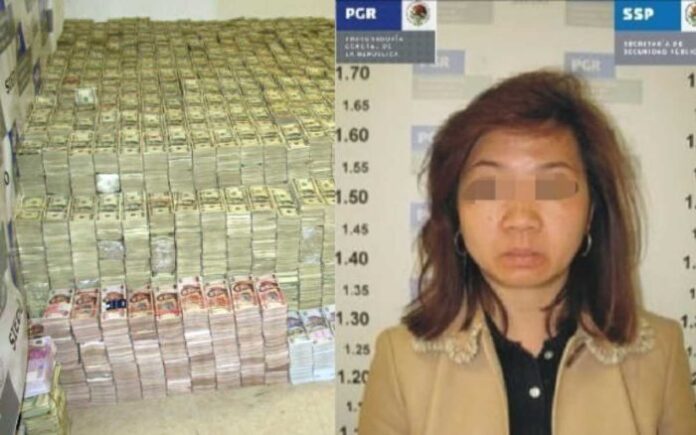 Tomoiyi Marx Yu, the wife of Zhenli Ye Gon, was released this Sunday after having served his 15-year prison sentence for the crimes of organized crime, money laundering, as well as possession of weapons and cartridges for the exclusive use of the Army.

The wife of the businessman and alleged trafficker of chemical precursors left the Penitentiary and Social Reintegration Center of Santiaguito, in Almoloya de Juárez, State of Mexico, at the end of her criminal process.

On March 15, 2007, while Ye Gon was in the United States, the Mexican government raided his house located in the Lomas de Chapultepec neighborhood, a luxurious residential area west of Mexico City, in the Miguel Hidalgo Mayor’s Office, and confiscated $206 million of dollars stacked in a room, in what authorities called the strongest “financial blow” against drug trafficking.

The authorities accused Zhenli Ye Gon of being probably responsible for committing organized crime and operations with resources of illicit origin.

Known as “Operation Dragon”, it was presented to the media as a major blow to crime at a time when former President Felipe Calderón (2006-2012) launched his war strategy against drug trafficking. In it, in addition to securing the money, a 14 thousand square meter laboratory was dismantled in the city of Toluca, in the State of Mexico, in which pseudoephedrine was processed.

Zhenli Ye Gon was charged in a court in the District of Columbia, in the United States, with conspiracy to manufacture 500 grams or more of methamphetamine, knowing that it would be imported into the United States. He was arrested by the Drug Enforcement Administration (DEA), on July 23, 2007, while dining in a restaurant in the state of Maryland, but in 2011 the Government of Mexico requested his extradition, which was carried out on July 18. October 2016.

He was held in the maximum-security prison of the Federal Center for Social Readaptation Number 1 “El Altiplano”, in the State of Mexico, where he is still awaiting trial for 12 serious crimes, such as drug trafficking, money laundering, and possession of prohibited weapons.

Since his arrest, the businessman has pleaded not guilty and has not been sentenced.