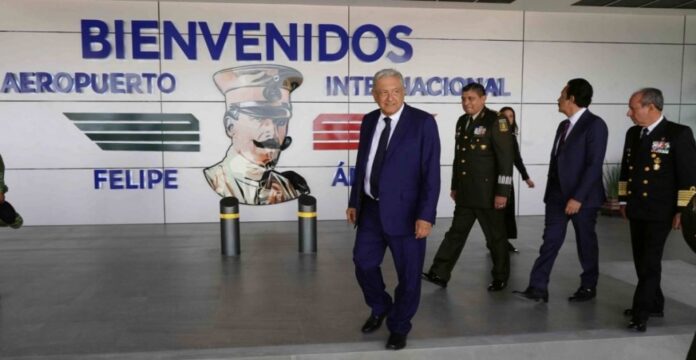 Given the recent decree that has caused great controversy, since airlines would be forced to move flights to AIFA, the former candidate for the president of Mexico, Diego Fernández, known as “Chief Diego”, indicated that AMLO now wants there to be more flights in Santa Lucía “where you don’t fly or flies”.

“They say that when TARTUFO was a child he played with paper planes, that’s why now with a decree he wants them to fly from Santa Lucía, where not even flies fly,” Fernández de Cevallos wrote on his Twitter account.

And it is that in recent days and in order to reduce airport saturation in the AICM, the AMLO government intends to publish a decree to transfer flights to the AIFA.

President Andrés Manuel’s decree would reduce arrivals and departures per hour at the AICM from 61 to 50, that is, it would eliminate 11 hourly operations, which would be transferred to AIFA.

With this measure, the Federal Government seeks to reduce approximately 20% of operations at the CDMX airport, although in the future it could decrease to 30%.

The Undersecretary of Infrastructure, Communications and Transportation (SICT), Rogelio Jiménez Pons, told El Financiero that the document would be published in the coming weeks and will also prevent charter flights, official operations and other regular commercial flights from operating in the AICM.

The official affirmed that the airlines Volaris, Aeroméxico and Viva Aerobus have already been notified about the decree, and added that they are also working on an incentive program to motivate companies to add operations to the AIFA.

Users reject AMLO’s decree on AICM and AIFA; what does it consist of?

And it is that, after President Andrés Manuel López Obrador accepted last week that his emblematic work “took off” slowly, with few air routes, and that it would “convince” the airlines to move to the headquarters of Santa Lucía without any type of imposition; Now, through a decree, he seeks to eliminate about 11 arrivals and departures from the AICM and force these brands to operate in the AIFA.

According to what was communicated by the Undersecretary of Transportation, Rogelio Jiménez Pons, with this movement the operations per hour would be reduced from 62 to 50, that is, 20 percent of what the Benito Juárez airport regularly moves; while the Felipe Ángeles would gain passenger traffic, because even a month after opening the aerodrome, only four airlines operate with routes to six national destinations and one international one, Venezuela.

What does AMLO’s decree on AICM and AIFA consist of?

According to what was announced, the federal government is expected to publish a decree that reduces the saturation of the capital’s airport and takes airlines and passengers to Santa Lucía.

This would prevent charter flights, official operations and regular commercial transfers from being carried out from Mexico City.

“It is a decree that will allow us better operating conditions. I calculate that we are talking (…) between 48 and 50 flights per hour (those that would remain in the AICM)” , detailed Rogelio Jiménez Pons, Undersecretary of Transportation.

However, the 20 percent reduction would only be the beginning, since it is expected that in the medium and long term AICM flights will be cut by 30 percent and transferred to AIFA.

The official announced that Viva Aerobus, Volaris, and Aeroméxico have already been notified to take precautionary measures, while they expect other airlines to “collaborate” through incentives, that is, they agree to go voluntarily to the Santa Lucía or Toluca airport if they are offered discounts. in airport costs, including the supply of jet fuel, only that is still being negotiated with the Tax Administration Service (SAT) and with the Treasury.

AMLO’s plan is that, by the end of this year, the AIFA will receive 2.6 million passengers and, although they assure that the decree is not “by force”, airlines will be subject to reducing their itineraries and looking for options in the center of the country and other airports.

“The scenario of reducing 30 percent is complicated, a total and direct reduction would be problematic. It is necessary to understand where the operations are migrated, the airlines are going to operate their flights where they generate profits” , has announced Cuitláhuac Gutiérrez, country manager of the International Air Transport Association (IATA, for its acronym in English) in Mexico.

The also director of the National Chamber of Air Transport explained that dialogues have been established with the Government to draw up a plan that contemplates the desaturation of the AICM with “several scenarios” that had not involved a decree of law until now.

And it is that the Benito Juárez airport currently has the endorsement to carry out 61 operations per hour, 58 of them for commercial airlines and three with Government flights.

What do Internet users think?

“AIFA is a complete failure, a criminal waste of money in a useless project. The only way to make it “functional” is forcing airlines to operate from there”, @AntilopeMalo

“AMLO assured that he was not going to force any airline to fly to AIFA. BUT now it turns out that it is twisting the arms of the Mexican airlines, Volaris, VivaAerobus, and AeroMexico, forcing them to fly from the new Central Avionera!!”, @GamesMartino

“When someone does not agree with what he does, he sees a way to do it for his thugs, assume this government or you are with him or you are a “traitor”, type of decree that is going to be thrown to reduce flights from the International Airport and take them to their airline center”, @ochoachristian2