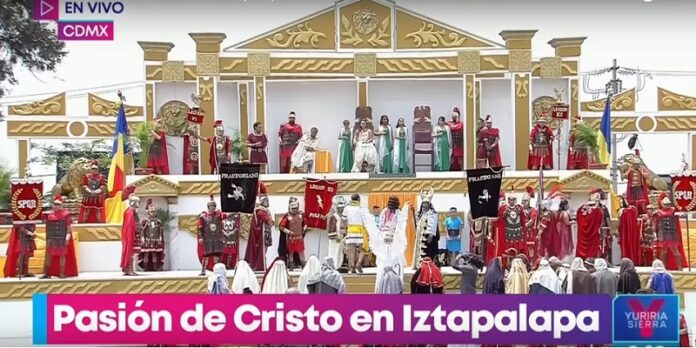 A Mexico City borough held Latin America’s most famous re-enactment of the crucifixion of Christ with spectators Friday for the first time in two years after the coronavirus pandemic forced televised-only performances in 2020 and 2021.

The lavish, detailed Easter week Passion of Christ has been played out in the east-side borough of Iztapalapa since 1843, and in recent years had drawn a week-long total of about 2 million spectators.

But spectators were banned in 2020 and 2021 in hopes of preventing the spread of the coronavirus.

Iztapalapa borough president Clara Brugada said Friday that 1.8 million people had attended this year’s re-enactment and that “it occurred peacefully, without any serious incident.”

Similar pageants are put across the region, including one held late Thursday in Mexico’s tourist city of Taxco.

The detailed re-enactment in Iztapalapa was first performed in 1843 after a cholera outbreak threatened the then-rural hamlet. All the actors are required by tradition to be borough residents.

Iztapalapa was long ago swallowed by the urban growth of Mexico City. The Passion includes huge processions, and public re-enactments with huge casts, culminating in the Good Friday re-enactment of the crucifixion in which ropes and a small ledge are used to guarantee the actors’ safety.