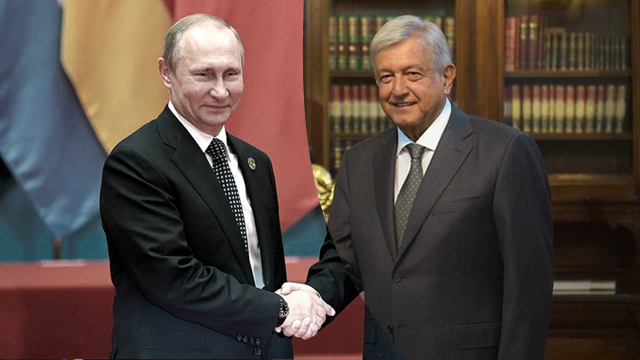 The United States ambassador to Mexico, Ken Salazar, asked the legislators to make an alliance with his country and with Ukraine, and not with Russia due to the military invasion it is carrying out.

General Glen VanHerck said during a Senate hearing that currently in Mexico is the largest portion in the world of members of the Russian military intelligence organization, known by its abbreviation GRU

The head of the US Northern Command has warned of the significant presence of Russian intelligence personnel in Mexico, noting his “concern” over Chinese and Russian efforts to influence the Americas region.

Gen. Glen VanHerck said during a Senate hearing that Mexico is currently home to the world’s largest portion of members of the Russian military intelligence organization, known by its abbreviation GRU.

VanHerck referred to the issue when asked about the challenges facing the United States on the border with Mexico, where several transnational criminal organizations operate.

“My concern with that is the instability it creates, the opportunity it creates for actors like China, Russia and others who might have nefarious activities in mind to seek access and influence in our area,” he said.

“I would like to point out that most of the GRU members in the world are in Mexico right now. That’s Russian intelligence personnel. And they keep a very close eye on their chances of influencing the opportunities and access that the United States has,” he assured.

VanHerck accused Russia and China of spreading disinformation and sowing “internal division and discord” with the intention of undermining the foundations of American democracy and democracies around the world.

“I have been in command for almost five months and what has impressed me most has been the extent to which China and Russia are aggressively expanding their influence in our neighborhood,” he said.

“Let’s be clear: China does not invest, it extracts,” he said.

And he added that his “greatest strategic concerns” are keeping the Panama Canal and the Strait of Magellan free and open, around which he said there were Chinese projects.

However, the head of the Southern Command considered the Russia governed by Vladimir Putin as “ the most immediate threat ”.

“Russia is increasing its involvement in the region, as Putin likes to keep his options open and have relations in our immediate foreign,” he said.

Richardson recalled that in January the Russian deputy foreign minister said that he could neither affirm nor exclude that Russia would send military troops to Cuba and Venezuela.

And he said that in February, just days before invading Ukraine, Russia’s deputy prime minister traveled to Nicaragua, Cuba, and Venezuela, “countries that maintain close ties with Russia and offer Putin a foothold in our hemisphere.”

The head of the Southern Command also highlighted the recent visits to Putin by the presidents of Brazil, Jair Bolsonaro, and Argentina, Alberto Fernández, something that she considered “worrying” in terms of a potential expansion of Russia’s ties with the region.

“In this hemisphere, transnational criminal organizations operate almost unchallenged and open a path of corruption and violence that creates a wedge and allows China and Russia to exploit these countries,” he said.

Before the senators, Richardson said that the United States must use “all available levers” to strengthen alliances with the twenty like-minded democracies in the region.

Thus, he mentioned the importance of security cooperation programs to train and equip the armies of partner countries, and multilateral exercises to develop “interoperability.”

He also highlighted the role of Colombia, the main partner of the United States in the region, in training other Latin American soldiers “to counter transnational threats.”

“Now more than ever, the United States must lead in this hemisphere and that requires constant focus and sustained investment to help build a shared neighborhood that is free, safe and prosperous for our generation and generations to come,” he emphasized.

Participating in the installation of the United States-Mexico Friendship Group in the Chamber of Deputies, the United States ambassador to Mexico, Ken Salazar, asked the legislators to make an alliance with his country and with Ukraine, and not with Russia for the military invasion of that country.

“We have to be in solidarity with Ukraine and against Russia, it seems to me that the Russian ambassador was here yesterday making a noise that Mexico and Russia were so close, that, sorry, can never happen, can never happen, I remember him very well that in the Second World War there was no distance between Mexico and the United States, I ask you, as the deputies who have so much strength, and it is not from the PRI, or the PAN or the Citizen or the PRD, it is something of Mexico, what Russia did here by attacking Ukraine, is an attack against freedom and the way of life of all of us, so when a family is attacked, if someone threatens a family, the family unites, here we are talking about Friendship Group Mexico and the United States, there can be no difference,we have to do the same thing that the two countries did at the time of World War II,” said Ken Salazar, US ambassador to Mexico.

The deputies recalled Mexico’s position in the face of the Russian invasion .

“That the position of our country in the conflict between Ukraine, the Free Republic of Ukraine and the Russian Republic not be distorted, we have strongly condemned it, Mexico has not, in any way, in any way, with any expression. , nor with the installation of Committees does it change its position in which it repudiates the invasion of one country to another, ”said deputy Ignacio Mier, coordinator of the Morena caucus.

“We reject Russia’s invasion of Ukraine, I think it is an act that cannot be allowed at this time, people are suffering, and we in the PRI have demonstrated on the side of the people of Ukraine and in favor of peace,” he said. Deputy Rubén Moreira, coordinator of the PRI caucus.

“Sometimes to be friends with some you cannot be friends with everyone, and we -from the PRD, from the legislative bloc of Va por México-, are not friends of war, we are on the side of the democratic countries, we are on the side of the UN and we are with the position of the Mexican Foreign Ministry”, added deputy Luis Espinosa Cházaro, coordinator of the PRD caucus.

The US ambassador recalled that there are four priority issues in the bilateral relationship: economy, security, migration, and the Bicentennial of diplomatic relations.

He referred to the electrical reform that the federal Executive intends and asked that current contracts be respected.