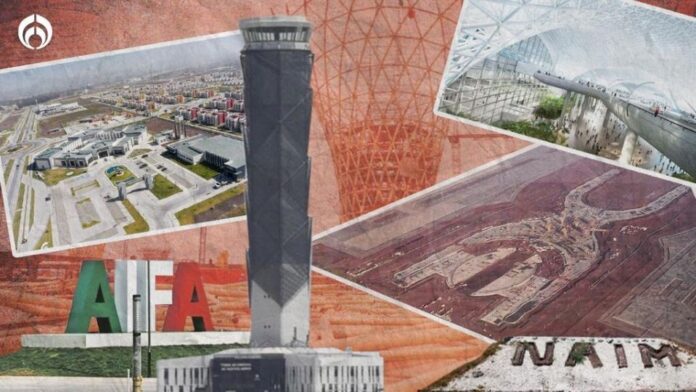 AIFA vs. NAIM: ‘Who’s Who’ at airports? We tell you in what aspects these two projects stand out.

The countdown begins for the inauguration of the Felipe Ángeles International Airport (AIFA).

And to all this, what are the five main differences between the flagship work of the Fourth Transformation and the New International Airport of Mexico City ( NAIM )? Who wins in terms of design, price, distance and culture?

The NAIM, also known as the Texcoco Airport, was a project designed by Foster + Partners, FR-EE and the Netherlands Airport Consultants (NACO). However, its construction was canceled after a public consultation promoted by the acting president, Andrés Manuel López Obrador.

This enclosure, if completed, would become one of the largest airports in the world with 743 thousand square meters.

NAIM’s plans considered encompassing the entire terminal within a continuous grid structure, whose façade was based on an ‘intelligent membrane’.

“The lightweight glass and steel structure and high vaulted ceiling are designed for the challenging ground conditions of Mexico City,” notes the Foster + Partners site.

As for the AIFA, said work will be located in more than 1,530 hectares. Its construction is in charge of the Ministry of National Defense (Sedena), and it is intended that in the initial phase it will provide service to 19.5 million passengers annually.

In addition, it will have a Cargo and Customs Terminal and, according to authorities, “it will have facilities that will offer a more efficient service to its users than the current airports.”

The Government of Mexico indicates that the Felipe Ángeles airport passenger terminal will be austere, sustainable, ecological, with a simple design, without expensive or challenging structures.

Likewise, the design seeks to highlight Mexican architecture. However, the interior of the AIFA toilets went viral due to the themes used for its decoration.

On the other hand, the NAIM designers considered using lights with a height greater than 100 meters, providing three times the light of a conventional airport.

In addition, his project would guarantee short walking distances and few level changes, thus making navigation easy for passengers, without the need to use internal trains or underground tunnels.

“The entire building is serviced from below, freeing up the duct and pipe cover and revealing the environmental skin,” details Foster + Partners.

The structure of the Texcoco Airport planned to take advantage of the sun’s energy, collect rainwater and direct daylight to direct shade.

Despite its cancellation, the New Mexico City Airport won first place in the ‘transportation’ category of the  2021 Rethinking The Future Awards .

Symbols of the culture of Mesoamerica, in addition to the Mexican; intense colors and the light structure gave the award to said infrastructure work.

One of the arguments of President López Obrador to cancel the work promoted during the six-year term of the former federal president, Enrique Peña Nieto, was the amount of investment in said project.

In this sense, the New International Airport intended to be carried out with an initial investment forecast of 168 thousand 880 million Mexican pesos. However, due to the devaluation of the peso, in 2018 the projection was increased to 285 billion Mexican pesos.

Meanwhile, the current management indicates that for the construction of the AIFA, the cost of the complete system of runways and taxiing (three runways) is 7 thousand 715 million 805 thousand 997.50 pesos.

“If said estimate is observed compared to the three tracks in Texcoco, the cost of the tracks would be 4 times more expensive than the complete system in the AIFA, 31 thousand 448 million pesos estimated in Texcoco compared to 7 thousand 715 million pesos of the complete system in the Felipe Angeles,” according to calculations by Mexican authorities.

In 2021, the Superior Audit of the Federation (ASF) indicated that the cancellation of the New Mexico International Airport (NAIM) cost 113 thousand 327 million 700 thousand pesos.

And in order to remind the users of the Felipe Ángeles airport of Mexican culture, in Santa Lucía you will find the Mammoth Museum, which has an extensive collection of fossil remains of prehistoric animals.

It stands out that, inside the museum, there are models and a faithful historical representation of what the center of the country was like millennia ago. You will even be able to know what Popocatepetl was like when he was “young”.

Unlike AIFA, the  New Mexico International Airport would be located closer to the capital of the Republic, 15 kilometers away, in the Federal Zone of Lake Texcoco.

On the other hand, the AIFA is located 44 kilometers north of the historic center of the city. A situation that has put him ‘under the spotlight’ due to the transfer time it would take to the ‘chilangos’.

In response, the Government has implemented routes and connection points to reduce travel time.

In addition, federal authorities announced that the waiting time to arrive will be reduced to compensate for the investment of time to reach the AIFA facilities.