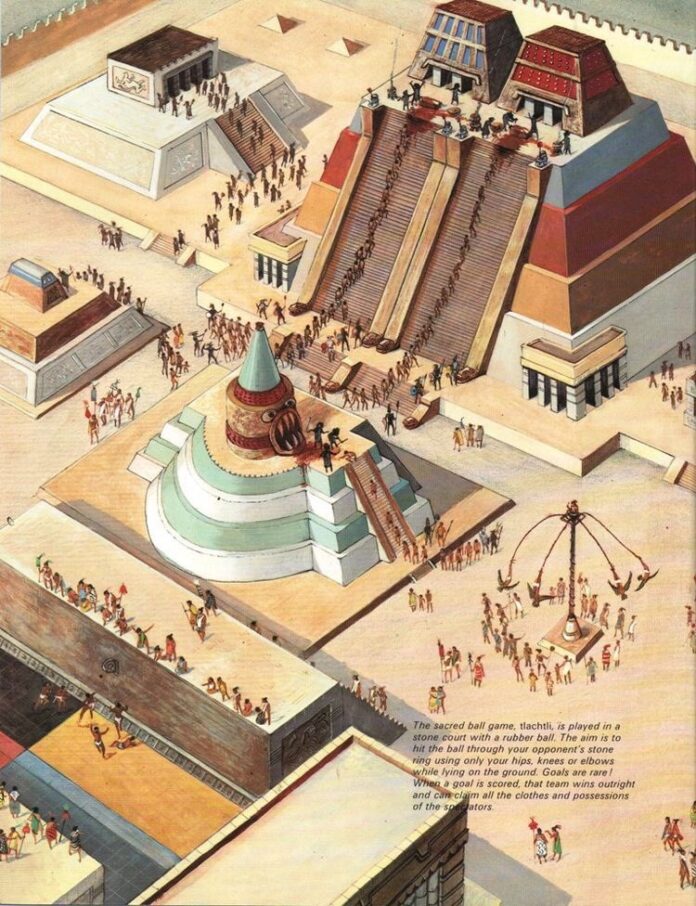 Learn about the new Underground Museum where you can see an offering, the steps of the ball game, and the Temple of Ehécatl.

This new museum space linked to the Templo Mayor is located below the Cultural Center of Spain.

This underground museum exists thanks to the sensitivity of the owners and the work of engineers, archaeologists, masons and authorities; since the property belongs to individuals who had the intention of building a parking lot in 2009, but when the directed archaeologists found pre-Hispanic vestiges, the work was modified.

What can be seen as part of the new museum space linked to the Templo Mayor are the remains of a bench, four steps, and a stairway from the ball court of the sacred precinct of Tenochtitlan, whose court extends below Guatemala Street in the Center History of Mexico City, as well as a killed Mexica offering and a part of the Ehécatl Temple that simulates the shape of a snake.

“We are interested in people knowing what is being done. This space has been refurbished, it is not yet fully completed because work continues during the week. Our interest is that this be preserved and can be exhibited to the public,” he told the Crónica newspaper, Raúl Barrera Rodríguez, director of the Urban Archeology Project (PAU) of the National Institute of Anthropology and History (INAH).

“When the owners finish their work, this space will be open continuously, by then it will be necessary to condition some museographic aspects, pieces will be placed, but now it is not possible”, indicates the expert.

This underground museum is owned by INAH : “We have reached an agreement with the owners and the space will have its own access, its services are still in the process of being attended to, and it is under the jurisdiction of the Templo Mayor.” Barrera Rodríguez remembers that it was in 2010 when he began a formal archaeological project after detecting the back of the Temple of Ehécatl.

“What we are seeing is a section of the building, not all of it because the building was about 34 meters long from north to south and the width we do not know exactly, but perhaps it is between 30 and 34 meters. Its facade must be below of the Cultural Center of Spain adjoining the other building which is number 20 on Guatemala Street”, he details. Likewise, the Temple of Ehécatl is a mixed building, that is, a rectangular building that has a circular attachment on its back, an architectural body 18 meters in diameter.

The archaeologist explained that there is a similar Temple of Ehécatl in Malinalco with an entrance sculpted with the face, the jaws of the serpent. In the case of Tenochtitlan, the sources refer that this temple was round, with a thatched roof and that it had access in the form of the jaws of the serpent, because it is a metaphorical representation of the coiled body of the feathered serpent.

About six meters from the Temple of Ehécatl and in parallel, Raúl Barrera’s team found vestiges of the main Mexica ball game. “The first to find remains of the ball game was Don Leopoldo Batres, he never knew that it was the ball game, he thought he had found a tzompantli stairway. Batres worked in the early 1900s and there was not much information at the archaeological level, it was even thought that the Templo Mayor was under the Cathedral”, explains Barrera Rodríguez.

What is missing, for now, is knowing the real characteristics of the entire ballgame building, but since the excavations have to be expanded and the spaces of the Historic Center are very complex. For now, in the underground tour, it is possible to see a slaughtered offering of two clay or mud braziers and another of a basalt bow from a brazier.

Another of the remains found are the foundations of one of the first colonial houses built after the fall of Tenochtitlan. The house belongs to Juan Engel, one of the first founders of New Spain, and it is made with the destroyed stones from the ball game.

Where: Guatemala 16, a few steps from the Metropolitan Cathedral and next to the Cultural Center of Spain.