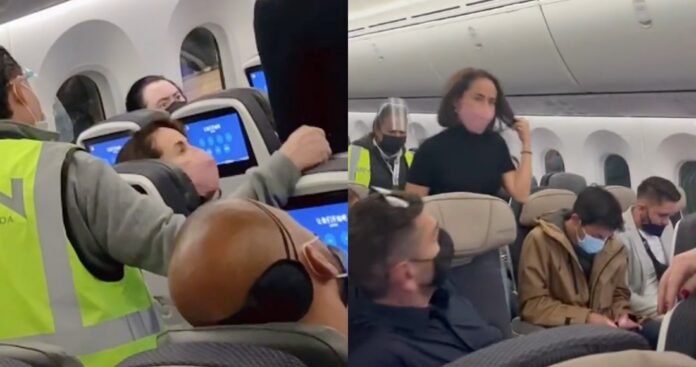 Fellow passengers cheered as the woman was escorted off the plane by airport workers after she refused to change seats.

Mexico City. Flight delays can occur for various reasons: unfavorable weather conditions, lack of availability on the runway, passengers who take time to board, among others. But a user on TikTok shared a strange reason that caused a flight from Mexico City to France to be delayed.

The user Enrique Galicia ( @enriquegalicial .a), who was on board the Aeroméxico plane, recorded a woman who changed her seat from tourist to Premier class, which caused airline personnel to come to her and ask her to return to its original place. However, the passenger did not accept and she began to argue with the workers.

“#LadyAeromexico: lady changes to a premier seat and because she does not return to her seat they have to get her off the plane, she delayed a flight to France,” commented the Internet user in his video.

In a second recording, the same woman is observed, who is escorted by airport employees when leaving the plane. The lady pauses on the way, presumably to try to talk to the other passengers and explain something to them, but they simply ask her to leave.

Between the two videos in which the story is explained, more than 330 thousand “likes” have been accumulated, in addition to hundreds of comments.

How much does a first class flight cost?

On this airline going from Mexico to France, according to its official website, it says that a ticket in traditional class is 21,271 pesos.

And for the case of ‘ first class ‘, as many people know it, it is between 26 thousand and 28 thousand pesos, of course, this includes some extra comforts.

(Screens taken from the Aeroméxico page)

How many hours are from Mexico to France?

According to the page itself, an average of 14 hours is made, with stopovers and taking into account that sometimes the flight can be delayed, especially when you ‘run into’ cases like those of #LadyAeroméxico.

For The Latest Mexico News About Living, Working, Investing, or Retiring in Mexico Please Join and Share our Page Click Here