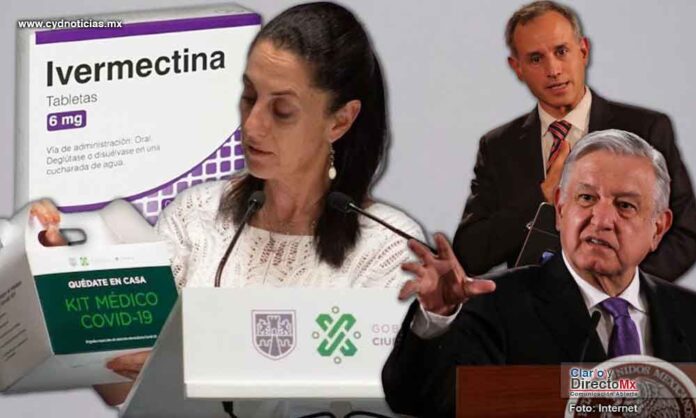 For anyone paying even a little bit of attention, it’s clear that Mexico has done a poor job dealing with the pandemic. In June 2020, Hugo López-Gatell, President Andrés Manuel López Obrador’s coronavirus czar, said a potential toll of 60,000 deaths would be a “very catastrophic scenario.” So far, more than 300,000 Mexicans have died, and some estimates paint a much more dire picture.

In December 2020, the city’s health ministry began distributing thousands of medical kits containing aspirin, the antibiotic azithromycin, and ivermectin among people who had tested positive for the coronavirus. At the time, vaccine access was still very limited and the use of ivermectin was not unprecedented. But evidence was sufficient to strongly discourage its use as a public health strategy, including to prevent hospitalization.

But Mexico City’s mayor, Claudia Sheinbaum, and her team chose to proceed. Her administration spent almost $1.5 million on the medical kits.

“By the end of January 2021, an unapproved drug with no evidence of therapeutic efficacy had been supplied to more than 50,000 residents of the capital without any control or rigorous monitoring,” Juan Pablo Pardo-Guerra, a sociologist at the University of California at San Diego, wrote recently.

As questions grew, Mexico City officials dug their heels in. “It is an extremely safe antiparasitic; it is used massively and there are no side effects that put the population at risk,” the city’s health secretary, Oliva López Arellano, said.

Despite the information that contradicted López Arellano’s reassurances, the distribution of ivermectin continued for months. Recipients were not informed about the debate around the drug.

“The lack of informed consent and the use of a drug not approved for that condition is very concerning,“ Mexican epidemiologist Jaime Sepúlveda, who heads the Institute for Global Health Sciences at the University of California at San Francisco, told me. “Even the pharmaceutical company that produces ivermectin (Merck) recommended it not be used as treatment for covid-19.”

For Pardo-Guerra, the lack of transparency has more ominous implications. “Citizens were exposed to an experiment that did not have their approval or consent, and that did not follow in the least ethical standards for experimentation on humans,” he wrote. “In this sense, the city government’s ‘quasi-experiment’ is reminiscent of the infamous clinical trials for syphilis treatments that the U.S. government conducted with marginalized populations in Tuskegee, Alabama.”

In the absence of thorough independent evidence to support its claims of ivermectin as an efficient preventative of covid hospitalization, Sheinbaum’s team wrote its own. In May, it announced blockbuster results: ”a reduction in the probability of being hospitalized between 52 and 76 percent,” according to José Merino, head of the city’s Digital Agency for Public Innovation.

IVERMECTIN AND THE PROBABILITY OF HOSPITALIZATION DUE TO COVID-19: EVIDENCE FROM A QUASI-EXPERIMENTAL ANALYSIS BASED ON A PUBLIC INTERVENTION IN CDMX

Objective To measure the effect of Mexico City’s population-level intervention –an ivermectin-based Medical Kit – – in hospitalizations during the COVID-19 pandemic. Methods A quasi-experimental research design with a Coarsened Exact Matching method using administrative data from hospitals and phone-call monitoring. We estimated logistic-regression models with matched observations adjusting by age, sex, COVID severity, and comorbidities. For robustness checks separated the effect of the kit from phone medical monitoring; changed the comparison period; and subsetted the sample by hospitalization occupancy, Results We found a significant reduction in hospitalizations among patients who received the ivermectin-based medical kit; the range of the effect is 52%- 76% depending on model specification. Conclusions The study supports ivermectin-based interventions to assuage the effects of the COVID-19 pandemic on the health system.

Merino gushed over the results on Twitter. “This validates public policy,” he said. Along with others, Merino submitted a paper with the results for publication on SocArXiv, an open forum for working papers. Over the next six months, it was downloaded 10,000 times, adding to disinformation about ivermectin.

But the policy and the paper quickly ran into trouble. In August, PolitiFact debunked its central claims. Skeptical voices in Mexico questioned the study’s inferences on the effect of ivermectin on hospitalization rates and debated the obvious ethical implications of keeping participants in the dark.

Then, just last week, Pardo-Guerra published a damning thread against Merino and his co-authors, asking SocArXiv to remove the ivermectin paper from the website. It “would be an important step in guaranteeing that pre-prints do not become a source of dangerous misinformation,” he wrote. Just three days later, the site withdrew the work and excoriated its authors for “spreading misinformation,” “unethically” dispensing “unproven medication” and failing to “properly disclose their conflict of interest.” Merino reacted furiously, accusing Philip Cohen, the site’s founding director, of acting from political motivation and being “unethical” and “colonialist.” (Cohen’s sharp response can be read here and here.)

Still, academic opprobrium and online mockery should be the least of the Sheinbaum administration’s concerns. It could face lawsuits. “It was bad policy,” wrote Cohen. “And unethical (not least because they didn’t inform people there was no research basis for the recommendation to take ivermectin.)”

Pardo-Guerra says this is “the story of an unjustifiable action that was justified with a false and arbitrary analysis disguised as science.”

It might all come down to Sheinbaum, a scientist by training who fashions herself as an “obsessive administrator.” She is also considered the political heir of the president.

On Tuesday, she called herself the victim of an obscure “conservative” conspiracy. But questions persist: How much did she know, and what did she sign off on? Her political future might depend on the answer.

Coronavirus in Mexico: The Ministry of Health presented its daily technical report on the progress of the pandemic in the country, in which it detailed the number of new Covid-19 infections and the number of deaths.

Coronavirus in Mexico: The Ministry of Health presented its daily technical report on the progress of the pandemic in the country, in which it detailed the number of new Covid-19 infections and the number of deaths.