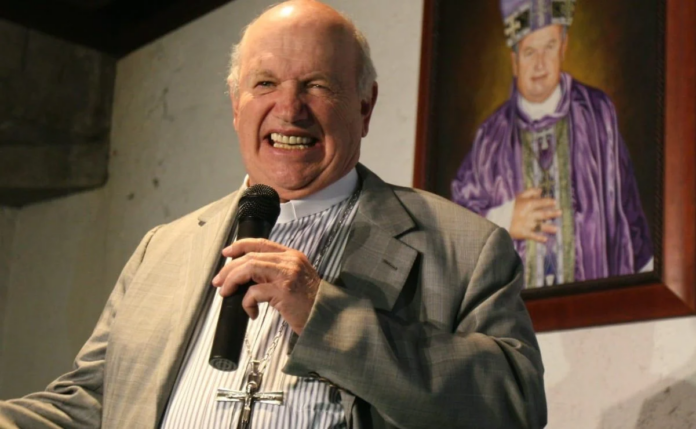 Onesimo Cepeda, the bishop, banker, golfer, millionaire and member of the power elite in Mexico

Banker, stock brokero, a “junior” in all its extension. And then voice and morality of the extreme right. One day Onesimo Cepeda “saw the light” and was ordained a priest. Outside, the tunic; but inside he had the soul of the Mexican elite. Rabid opponent of abortion and any other right promoted by progressives. A lover of golf, cigars and the most expensive wines, he despised López Obrador and embraced PRI and PAN members. They accused him of appropriating a multimillion-dollar estate and in his last adventure he wanted to be a candidate. Everything, always, aboard the most expensive vehicles; everything, always, playing at being “sensitive” with the poor: he was Bishop of Ecatepec. A character, no doubt. One –and perhaps it is good– unrepeatable.

A lover of luxury, power, and scandals, Onesimo Cepeda Silva was part of the generation of religious who blended in with the political and business class of Mexico to the point of being called the “ Bishop of the elites”. However, his religious vocation was late, at 33 years old he was ordained after a wild life as a rocker, reveler, banker and promoter of bullfighting. “He allowed himself to be pampered by the PRI and the PAN,” recalled Bernardo Barranco, a sociologist specializing in religious beliefs and culture.

Onesimo Cepeda passed away on the night of Monday, January 31 at the age of 84. Although the cause was not specified, on January 9 it was reported that the Emeritus Bishop of Ecatepec had been admitted to a hospital to be intubated after complications from COVID-19.

His way of speaking and acting, hardly typical of a cleric, made the Bishop Emeritus of Ecatepec one of the most controversial religious figures in the country. Dr. Bernardo Barranco refers that Onesimo was part of the so-called Club of Rome, a very influential power group parallel to the structure of the Catholic Church that monopolized the dialogue of both the Vatican and the political and business class of Mexico.

“The Club of Rome was made up of Girolamo Prigione, Marcial Maciel, Norberto Rivera, Emilio Berlié, Juan Jesús Posadas Ocampo and several others. It was a pressure group within the Church that played parallel to the structure of the Episcopate, blending in with the political class, first with the PRI and then with the PAN,” explained the religion expert. “Onesimus is one of the last of that generation of bishops who were lovers of power, who believed that by colluding with the political and business class of the country they were going to preserve or increase the political, social and religious agenda of the Catholic Church.”

His religious life took several turns within the Catholic Church until he became, in 1995, the First Bishop of the newly created Diocese of Ecatepec. It was precisely in that place where he earned the title of “Bishop of the elites” because he only served rich people and their friends with power. He was also the center of several controversies and came to have confrontations with figures from the Mexican left such as the current President Andrés Manuel López Obrador.

Onesimo Cepeda was the archetype of the “Worldly Bishop”, mentioned Bernardo Barranco. “He liked to live with the refinement of abundance and relies on a network of relationships of people with high resources to finance himself.”

“He was a very worldly bishop, obscene at times, he used expressions and words not typical of a representative of the Church. For example, when he criticizes the former legionnaires who denounced Maciel, his friend, he asked them why they took so long to file the complaint, ‘it seems to me that they liked it,’ he said. He had that kind of coarse expressions “, explained Bernardo Barranco.

But before devoting himself to religious life and trying, without success, to obtain a candidacy for a deputation for the Fuerza Por México party, already at the end of his days, Onesimo Cepeda held positions in important companies and on his resume is having He was co-founder, along with businessman Carlos Slim Helú, of the Bolsa Inversora Bursátil, a company that we know today as Grupo Financiero Inbursa.