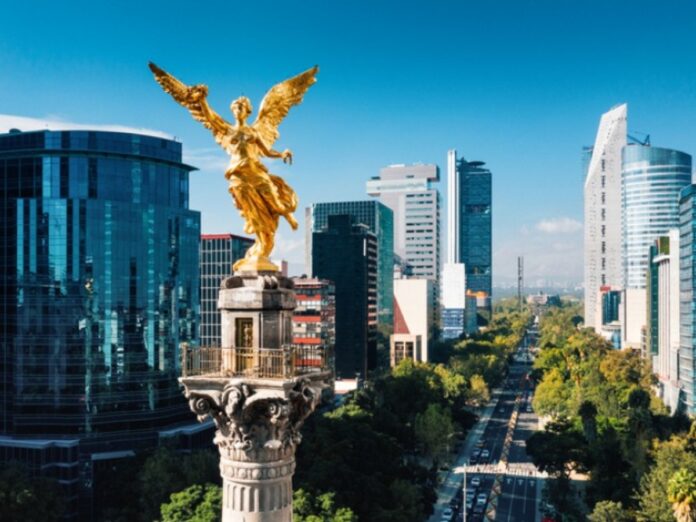 If one day you enter the column of the Angel of Independence, the first thing you will see is an effigy of this man of Irish origin, but what earned him such an honor?

Hidden inside the column that supports the Angel of Independence is the statue of the Irish Guillén de Lampart, an unknown man almost erased from the history of Mexico, accused by the Holy Inquisition of New Spain of sorcery and having dealings with the Calvinist devil.

But with such a bad record, why did his effigy earn a place inside the most praised pedestal in the country? Before answering that question, it must be said that this Irishman was burned after a long, tortuous and maddening confinement in the Palace of the Inquisition, a lifetime of suffering that, we now know, was unjust.

To understand the story of this Irishman and his tragic end, we must start from the beginning. In 1628 the young Guillén de Lampart, then about 17 years old, wrote a poem dedicated to King Charles I of England in which he claimed that he had invaded Ireland, since he considered that he did it for base and selfish purposes.

Carlos I, who at that time was barely 28 years old and only three years after taking possession of the throne, was temperamental and had little tolerance for criticism, so he ordered the execution of Guillén, who was thus forced to escape to New Spain on board of a ship that, in a few hours, was hijacked by pirates.

Not much is known about what happened afterwards, but far from being killed or taken prisoner by the corsairs, he became a friend and one more member of them. He managed to get his new comrades to convert to Catholicism, thus obtaining the sympathy and amnesty of the Crown, thanks to which they were able to land freely in Spanish ports.

In Spain , Guillén de Lampart befriended the count, Duke of Olivares, adviser to the king, who sent him to New Spain to watch over the Jews and, over time, seize their wealth for the benefit of the crown, but his revolutionary ideas they had not abandoned him when he set out on the journey to the newly conquered continent.

His idealism would have earned him the admiration of many had the times been different, but not in 1642. Guillén arrived with the conviction that Ireland, Portugal, France and the Netherlands would recognize New Spain as an autonomous territory, and that the Indians, Creoles and Spaniards who supported independence would be rewarded, however, this project brought him many enmities.

The perfect arm to silence him was the Inquisition, whose members formed two causes for him to initiate a process: the first of faith and the second of infidence, although later they added sedition, sorcery and having dealings with the Calvinist devil, enough accusations to leave him locked up for a long time, until the eighth year of his captivity came and he escaped.

He did it by breaking and bending iron bars. And he did not resist the pleasure of ridiculing them and exhibiting them: at the time of fleeing, he left a letter addressed to the viceroy, in which he accused the inquisitors of hiding the collection of fortunes of people accused of Judaism to distribute it among them, he also crossed them out from mistreatment of prisoners as well as being all ignorant, of course the inquisitors’ hatred of Lampart grew.

Not late, perhaps with a reward involved, they requested any information to find the whereabouts of the Irishman. Less than 48 hours after the escape, a tailor named Francisco Garnica blew out that Guillén was lying hidden not far from the Santo Oficio prison , exactly he pointed his finger at a house in Donceles, and there they went for him.

Without further ado he was sentenced to be burned at the stake, but he was imprisoned for another nine years before the flames singed his flesh. However, prior to this happening, Guillén de Lampart hanged himself in his cell with the help of the ring to which he was chained. The inquisitors, angry at this action, threw him into the fire anyway, even though he was already dead.

Discover more places in CDMX. You can find everything you need to know about Mexico City here: https://disfrutatuciudad.mx/