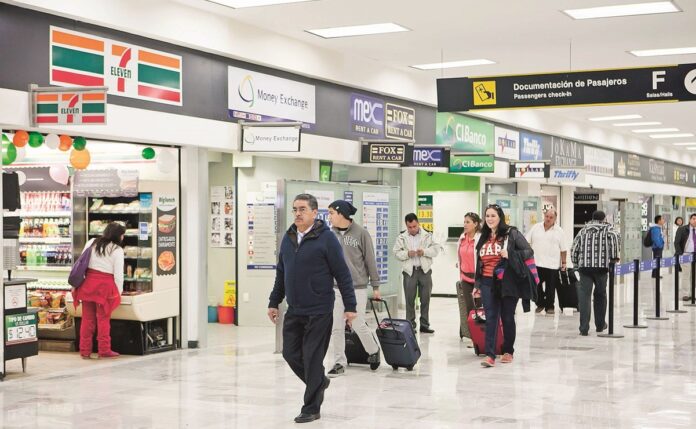 The Mexico City International Airport could not collect 1,986 billion pesos for the rent of premises, spaces, and other services signed with 243 companies from January to September 2021

The Covid-19 pandemic, the bankrupt airlines, and the company La Riviera Vive Contigo México – founded by the Panamanian Abdul Mohamed Waked Fares – shot up 90% of the debts for the rent of commercial premises, spaces, and other services offered at the International Airport of Mexico City (AICM).

The terminal could not collect 1,986 billion pesos as of September 30, 2021, from the rent of premises, spaces, and other services signed with 243 companies. Among the debtor companies is La Riviera Vive Contigo México, which was intervened by the United States government, as well as several bankrupt airlines, such as Consorcio Aviaxsa, ABC Aerolíneas (Interjet) and Compañía Mexicana de Aviación.

As of December 31, 2020, Mexican and foreign companies had not paid 1,042 billion pesos for the rent of commercial premises and services provided within the AICM, according to documentation that Forbes Mexico had access to.

The income from the rental of commercial spaces, spaces, and other services to the airlines, exchange houses, restaurants, duty-free shops, and other companies are used for the operation and maintenance of the two AICM terminals.

For the second consecutive year, the non-payment of companies for the rental of commercial premises increases as a result of the non-payment and recognition of debts of the company of Abdul Mohamed Waked Fares, who in 2016 was accused by the United States Department of the Treasury of the alleged commission of the crimes of money laundering, against collective security and illicit association.

Between January and September 2021, La Riviera Vive Contigo México increased 2,282% the debt for the lease of commercial spaces to sell products in the AICM, since it registered a default of 927 million pesos.

In 2020, Abdul Mohamed Waked Fares’ company owed 38 million pesos for the services provided by the Airport. From the lease from 2015 to 2019, La Riviera Vive Contigo México had not paid 96 million pesos to the AICM authorities.

“Some 12 invoices for 224 million pesos, not including VAT, issued from January to December 2018, for the rental service to the company La Riviera Vive Contigo México were not charged,” said the Superior Audit of the Federation (ASF) .

The airport reported that that year the company did not report payments, as well as that a new contract had not been signed in that year, according to the 2018 Public Account audit, which was delivered a couple of years later.

“The AICM continued billing the services until December 31, 2018, without crediting the initiation of collection efforts,” stated the ASF.

Consorcio Aviacsa, a company that was suspended on June 2, 2002, by the Ministry of Communications (SCT), added debt of 180 million pesos for the rental of spaces at the Airport as of September 30, 2021.

The airline was detected irregularities in its planes that represent risks to aviation and a danger to safety in the transport of people and goods.

The Compañía Mexicana de Aviación, which has been on the ground since August 28, 2010, added debt of 107 million pesos between January and September 2021.

A few days later, the company entered bankruptcy, in order to start negotiations with creditors in order to reduce the debt and avoid the bankruptcy of Mexicana. Today the workers of the company seek to return to heaven through a cooperative promoted by the government of Andrés Manuel López Obrador.

The pandemic caused by Covid-19 is the greatest impact that aviation has had since World War II, according to the Mexican Institute of Transportation (IMT).

Air activity during 2020 decreased significantly in Mexico and the world, as a consequence of the pandemic, reveals the study “Impact of Covid-19 on air transport of passengers and cargo in Mexico during 2020”, carried out by IMT.

The impact of this crisis on the region’s airlines has been overwhelming and overwhelming: “Passenger traffic has stopped and revenue flows have greatly decreased,” says the agency dependent on the Ministry of Infrastructure, Communications and Transportation. (SCT).

The blow of the pandemic to the AICM

The Covid-19 pandemic and mismanagement led to the departure of ABC Aerolíneas, known as Interjet, which owes more than 120 million pesos to the Mexico City International Airport for the rental of business premises.

The Mexican airline founded by Miguel Alemán has a debt with the Tax Administration Service, the National Institute of Migration, Airports and Auxiliary Services (ASA), Navigation Services in the Mexican Air Space (Seneam), as well as suppliers and workers unionized, especially pilots and flight attendants.

“Sadly, it is observed how those who have control of what remains of Interjet do not have the resources (neither their own nor loaned) to resume activities,” said Francisco del Olmo, union leader of section 15 of the CTM.

However, Carlos del Valle, son of Interjet’s main shareholder, presented the airline’s counters at the Felipe Ángeles International Airport (AIFA) through social networks. Today they have not paid their debts nor do they own the brand, much less have a planes to refloat Interjet.

Mexicana MRO, one of the main assets of Mexicana de Aviación, added debt of 93 million pesos with the AICM between January and September 2021.

Sistemas Integrales para el Transporte (Sintra), a company established in March 1989 by a group of Mexican businessmen to meet the needs of the mass transportation area, stopped paying 59 million pesos for the rent of premises and space in the AICM.

Transportes Aeromar, an airline that has its brands seized for not paying taxes to the Tax Administration Service, registered a debt of 40 million pesos for the rent of commercial premises at the Airport.

Dufry México, a company chaired by the Spanish Juan Carlos Torres Carretero, owes more than 244 million pesos for the rent of spaces for the sale of wines and spirits in duty-free shops in Terminal 1 and 2 of the Mexico City Airport.

The Swiss company Dufry reported that sales in duty-free shops were affected by the Covid-19 pandemic, as were many other companies in the travel and tourism industry.

Between 2010 and 2019, the Mexico City International Airport could not collect debts of 3,191 billion pesos, despite the fact that it provided the spaces and commercial premises and services for them to operate. In total, the past due portfolio is 6,220 billion pesos at the end of the third quarter of 2021 and the end of last year remains to be known. Today starts companies facing the challenges of the fourth wave of Covid-19.

The 20 companies that owe the most rents to the Mexico City International Airport: