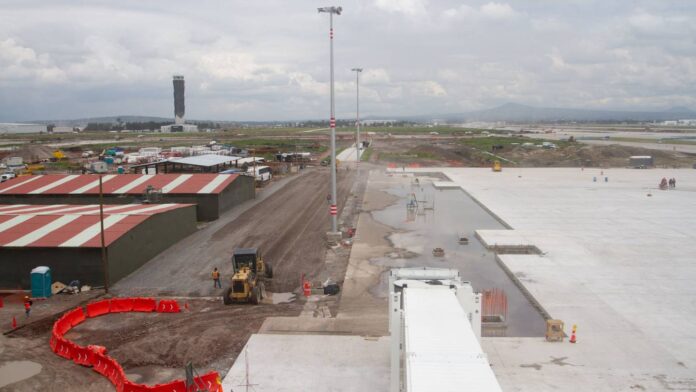 Access around the airport could be ready by March 21, but it will lack the promised routes to streamline and boost traffic.

On March 21, the new Felipe Ángeles International Airport will be inaugurated, the mega-project with which President Andrés Manuel López Obrador will bury Texcoco’s dream. The military work is 85 percent complete, so the first phase of construction can be delivered in a timely manner. But it will be the only thing, because Santa Lucía, the seat of the airbase that served as a placenta, lacks functional access routes so that it can operate with the normality that an airport of this scale requires.

At the end of last year, the ground connectivity of that airport barely exceeded 40 percent, and it only referred to the modernization and widening of lanes on the Mexico-Pachuca highway, the main access to the airport through Tonatitla, near Ojo de Agua, where the toll booth is located, an elevated viaduct and the junction with the road. Nothing is known about the rest of the works.

However, even the tangible work, to the eye of someone who is not an expert in construction, seems difficult to complete in 71 days. The main access by Tonatitla has no delay, say people with first-hand information. But the elevated viaduct, which can be seen when it crosses through Tecámac, a municipality next to the airport, which is almost completed, has no new access roads and connects with an old two-lane avenue.

In other words, the access around the airport could be ready by March 21, but, from what can be seen in situ, it will lack the promised routes to streamline and boost traffic. The same is seen with the junctions, whose construction is progressing, although in some sections more slowly and without connecting several of them with the highway.

The work on the highway begins after passing the Ojo de Agua toll booth, 24 kilometers from the new airport, and just as there are sections that seem to be only waiting for the asphalt, in others the route is barely being excavated. Within the Army, there is anxiety about the delay in land connectivity, and they would like the President to ask them for a firefight to build those roads. But even if it were, it doesn’t solve the underlying problem.

If, hypothetically speaking, all the access works to the Felipe Ángeles were on time, the airport would remain like an oasis in the middle of the desert, distant in time from Mexico City, where its main market is. Volaris and Viva Aerobús, the only two national airlines that will start operating flights since their inauguration, anchor their business model in the travelers of Pachuca and its surroundings. But an airport like Felipe Ángeles just for them would be the death of López Obrador’s first mega-project.

It is not the intention, although there are signs that it wants to be an airport for low-cost flights, such as the change in the airport use fee (TUA), which is the most expensive in Benito Juárez in the City of Mexico (570 pesos), will become the cheapest in the country (120 pesos). The TUA has an impact on the cost of tickets, certainly, but it also reduces revenue to self-finance the airport.

In any case, terrestrial connectivity is the headache. The Mexico-Pachuca highway, from what can be seen from the works, will be a great road that will begin 30 kilometers from, let us put as a reference, the Monument to the Revolution. Anyone who on a normal day, at any time, has taken that highway through the Indios Verdes exit, 8.5 kilometers from the same monument, knows how congested it always is. On any given weekday at noon, without being a rush hour, the distance of just over 31 kilometers between Indios Verdes and the toll booth in Ojo de Agua takes about 40 minutes.

On Saturday, January 1 of this year, with no traffic at all, the route between the Monument to the Revolution and the Felipe Ángeles, which are in an almost straight line, took 48 minutes. At the same time, on Thursday, January 6, which also does not collide with the very heavy traffic on Fridays, the same route was made in one hour and 20 minutes. But for a person, let’s say, in the Benito Juárez mayor’s office, the same route went up to one hour and 34 minutes, one hour and eight minutes more than to the Mexico City airport.

The lack of connectivity today creates a funnel that opens when the toll booth is passed. There are alternate routes such as the Circuito Mexiquense, which can be taken near Santa Lucía and passes behind Benito Juárez, but they are an additional 20 kilometers (and fuel) to cut scarce 10 minutes of time. Another route is through the highway that connects Ecatepec with Naucalpan to be able to use the second floor of the Periférico, which takes, depending on the traffic in Ecatepec, at least another hour.

The government is building a 23-kilometer branch of the Buenavista-Cuautitlán Suburban Train from the Lechería station, where the new airport will be accessible in 40 minutes. However, it won’t be ready until next year. On the direct route between Benito Juárez and Felipe Ángeles, as far as is known, it has not even begun to be carried out. The elevated viaduct from Mexico City, announced 10 months ago, is the same. The connection works with the Mexiquense Circuit, either.

For the inauguration of the Felipe Ángeles on March 21, there is little chance of a significant change in connectivity. The President will flag a white mammoth. The challenge ahead is that before the end of his six-year term he has an efficient, viable, and functional airport for everyone, which really makes a difference with the liquidated Texcoco, and does not become the mirror of his misfortune.