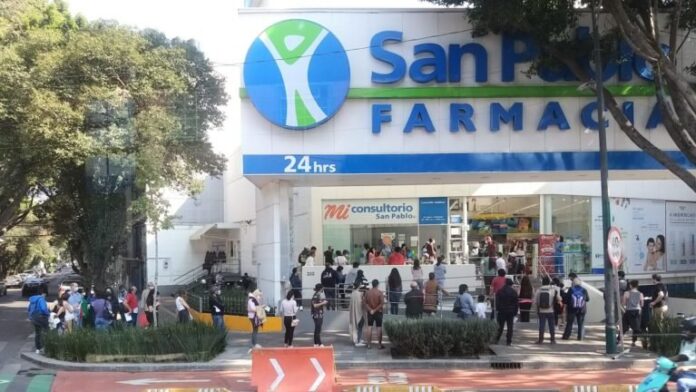 Since the last days of 2021 and until yesterday, the pharmacies in CDMX look full of people looking for a test for Covid-19.

As soon as the Christmas euphoria ended and at the beginning of the year, the long lines in branches of Farmacias San Pablo and del Ahorro by people seeking a rapid test for Covid-19 began to reign in various parts of Mexico City.

Antonio Ballinas, 36 years old, traveled to the city of Tijuana, Baja California, to celebrate Christmas with his family; at the end of the year, he decided to spend it with his girlfriend and some friends.

However, yesterday, January 3, he began to feel mild pain in his throat and a little cough, so he decided to go to a pharmacy to confirm if he was infected with Covid-19.

However, although a pharmacy in the Cuitláhuac neighborhood, in the Azcapotzalco mayor’s office, came early, the lines with people with the same holiday activity and who showed symptoms were already considerable.

“I did not think there would be so many people, but I think that we all do not measure the risk of getting together at the end of the year,” he acknowledged in an interview with Forbes Mexico.

“If I am infected, it is most likely that my girlfriend and friends are too. I am here to warn you for sure to take your precautions, “he added.

By 11:00 in the morning, the line was already surrounding the branch, as around 100 people were looking to access the rapid test that has a cost of 500 pesos.

Farmacias San Pablo has reported that long lines have been registered in its branches with rapid test service since last December 30, when the demand overflowed.

Such is the frequency of residents of the capital who seek to confirm a diagnosis that Farmacias San Pablo has set up an appointment system in order not to generate crowds in its branches.

However, this system also seems to succumb to demand, which is why errors have been generated when scheduling.

“Unfortunately due to the increase in demand for tests we are very sorry about this situation. We channel your report to the corresponding area for follow-up. Nice day! ”, Complaints are responded to from the chain’s Twitter account.

According to data from the Federal Ministry of Health, in the first week of 2022, there are 47,874 active cases of Covid-19 in the country, 63% more than the previous week.

On the other hand, the capital government announced that this week the macro kiosks will be installed again to carry out detection tests for Covid-19 and will restart these in some shopping centers in the capital.

According to health authorities, Mexico City is one of the entities where the highest number of infections have been registered nationwide in recent hours.

However, despite the increase in coronavirus cases, the reduction in hospital occupancy continues at the national level.

This morning, President Andrés Manuel López Obrador asked the population not to be alarmed by the Ómicron variant in the country and called to attend to the vaccination campaigns in order to prevent the spread of infections, hospitalizations and deaths.

In addition, the Secretary of Health, Jorge Alcocer, assured that the health system has a capacity of 90% of beds available to attend serious cases.