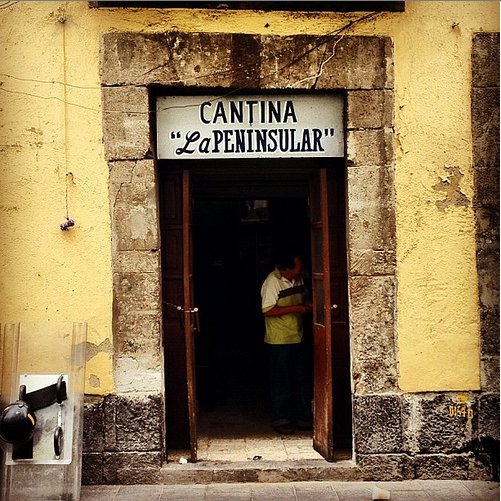 Legend has it that the “Northern Centaur” used to go there to take refuge from his enemies and took advantage of it to have a good time.

Canteens have always been places of social gathering since normally people go to relax and have fun with their partners, families, and friends.

As Mexicans are characterized by their happy and party personality, you will surely want to know which is the oldest cantina in the City to be able to go to know it and, incidentally, soak up a little of the capital’s history.

In 1857 the first cantina was born in Mexico that was called El Nivel. It was located on the corner of Coin Street, very close to the National Palace, and is recognized for having been the first business to obtain a license from the Mexican authorities to sell alcoholic beverages. However, in 2008 it had to close because the building was expropriated by the National Autonomous University of Mexico (UNAM).

Women suffered a lot of discrimination for entering canteens and several establishments even had cartels that said “entry to women is prohibited.” (Photo: INAH)

For this reason, the one that happened to occupy the position of the “oldest canteen” in the City was La peninsular. The origin of this place dates from the year 1872 and it has always been characteristic for having a bar of almost six meters. On the other hand, legend has it that Pancho Villa used to go there to take refuge from his enemies and take the opportunity to have a good time.

At this location, you can enjoy the classic “snack” and a wide variety of drinks and food. On weekends there is always live music. It should be noted that the place was remodeled in 2013, so now it has a more modern and striking appearance, however, it continues to preserve the historical vibe that characterizes this canteen on its walls and inside.

Pancho Villa was born on June 5, 1878, and was one of the most important revolutionary heroes of the 20th century.

Although it opened its doors in 1872, it was until 1982 that the establishment let women in. If you are interested in visiting this place, the address is at Calle Alhóndiga 26, local 4, in the Historic Center of Mexico City, very close to the Zócalo.

One of the peculiarities of La peninsular was the unique legend that was written in the letter to order: “Legal permission for married men: I hereby state that I authorize my partner to have fun whenever he wants and can, drink up to get drunk, gamble and amuse yourself with whatever ladies and gentlemen come your way. The wife and mother-in-law sign ”.

On the other hand, these establishments have had great importance since the 19th century, since thanks to the atmosphere, the diversity of drinks, and the food that has been offered in these places, a significant mark has been left on Mexican society. As the German writer, Ernst Jünger put it, “wine has changed history more than the sword”.

The first canteen arose in 1857 and was called “El Nivel”. It was located on the corner of Coin Street, very close to the National Palace.

Historically, these sites have fostered cultural encounters and the exchange of ideas between people. It is important to note that in the development of the canteens not everything has been rosy. According to information from the author Aranza Tovar, women suffered a lot of discrimination for entering these places, and several establishments even had signs that said: “entry to women is prohibited.”

This was because it was said that these places were only for men because, at that time, they were the only ones who could drink alcoholic beverages. Later, the canteens were adapted to social changes that implied resignifying the role and importance of women and they were allowed to pass until the end of the 19th century .