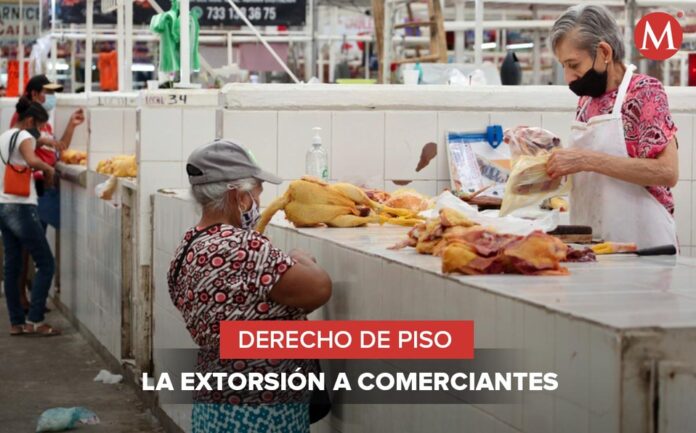 Tenants from 10 states report that extortions against small businesses and street vendors increased between 20 and 45%.

For just over three months, Ricardo has owned a chicken shop in Mexico City. Although his business is just starting, he received an envelope containing a message asking him to pay a weekly fee in order to continue operating his establishment.

In a recording held by MILENIO, Ricardo explains that they ask him to cover the so-called “right to the floor” or to face the consequences. This paper contains a telephone number to which you have to confirm if you agree to make the payment.“And if we accepted, then we sent a message and there was a number to which we had to send the message. We send a message to say yes, “said Ricardo, who asked to protect his identity for fear of reprisals.

Small merchants, such as chicken vendors, shopkeepers and even street vendors are the new targets of extortionists across the country, reveals an investigation by MILENIO in 10 states, where tenants indicate that the collection of land rights increased between 20 and 45% during 2021.

Although there are no official data on the collection of land rights, the figures offered by small businesses coincide with the statistics released by the Secretary of Security and Citizen Protection, Rosa Icela Rodríguez, who reported that extortion increased 29.9% between November last year and the same month in 2021.

Sheltered by criminal organizations such as the Jalisco Nueva Generación Cartel (CGJN), or Los Zetas, criminals demand fees ranging from 100 pesos a day to 15 thousand pesos a month for letting them work.

With the economic reactivation in Puebla, the Citizen Council of Security and Justice of the State estimates that extortions soared by at least 20 percent. Just from January to September of this year, the State Attorney General’s Office counts 90 cases; however, for the INEGI, crimes like this have a black figure of around 97 percent.

Merchants are the main victims of groups of extortionists, such as Fuerza 2000, which operates in the Historic Center of the capital, charging up to 2,000 pesos a month under the slogan of offering “security”, while “the voluntary fee” for street vendors is of up to 500 pesos a fortnight.

Just on October 18, a group of sex workers denounced that a subject is known as Mauricio, El Viejo Matus, threatened to “pick up” them, beat them, and even disappear them if they did not pay him 300 pesos a day.

Force 2000 is not the only one that devastates the capital of Puebla. From streets 10 to 16, Los Fedes terrorize the La Acocota and Central de Abastos markets with fees ranging from 500 pesos to street vendors to 1,500 to established merchants, in addition, it is presumed that they are related to the assault of routes to public transport in different sections of the city on the orders of Federico L.

Los Rojos collect floor fees from freight carriers, while Los Pelones carry out these activities in the sections of Bulevar Carmelitas, La Fayuca market, in the CAPU area, and La Cuchilla, where each merchant must cover payment of approximately one thousand or 1,500 pesos every two weeks.

The State of Mexico is also a fertile field for these criminals who operate mainly in the southern region and in the metropolitan areas of the Valley of Mexico and Toluca.

According to the Criminal Stoplight, 37.97 percent of the extortions perpetrated nationwide are committed in Mexico, 4.74 times more than in Mexico City, Veracruz, and Nuevo León, with eight percent each.

From January to August 2021, 5 thousand 722 complaints have been reported in the country, of which 2 thousand 137 correspond to the State of Mexico. Compared to last year, extortion increased eight percent in 2021 but soared 35% compared to the national average, highlights the Criminal Stoplight.

For its part, the Secretariat of Security of the State of Mexico refers that the tenants are the most affected by this type of practice since they are victims in 65 percent of the cases.

The reports of the Lantia Intelligence organization are not encouraging either, since they detail that the entity has the presence of the Sinaloa Cartel, the Gulf Cartel, Los Beltrán Leyva, the Knights Templar, the Michoacan Family, the CJNG, as well as local criminal groups or regional

In recent days, the authorities dismantled a gang that operated in the Mexican capital dedicated to extorting chicken sellers, whom it coerced to buy the most expensive product, in the San Felipe Tlalmimilolpan, Tlacotepec, San Juan Tilapa, and Capultitlán delegations.

Established and itinerant merchants from Tamaulipas, mainly on the northern border, also say they are prisoners of extortion, although they admit that they do not report it out of fear.

These criminal activities are in charge of two large cartels: Del Golfo, which operates in Victoria, the state capital, Mante, Soto La Marina, Nuevo Laredo, Miguel Alemán, Díaz Ordaz and Valle Hermoso; and Los Zetas, in the metropolitan area of ​​Tampico, Madero, Altamira, and on the border of Reynosa and Matamoros.

In Guanajuato, extortion has another aspect, which is carried out by telephone from prisons in the northeast of the country such as Tamaulipas and Nuevo León. These are virtual kidnappings, which have no relationship with the criminal groups that operate in the entity, warned the prosecutor Carlos Zamarripa, after ensuring that they have resolved eight out of 10 complaints.

He assured that 80 percent of extortion calls come from the Matamoros prison and the other 15 percent from another jail in the north of the country.

In Jalisco, the floor charge does not appear in the monthly insecurity figures, but the group knows that criminal groups collect fees from merchants and businessmen. So far in 2021, the prosecution has 323 cases of this type, however, extortions or floor charges remain in a black figure, practically impossible to know.

In a central neighborhood in Guadalajara, for example, there are vendors of all kinds who receive visits from people who claim to be members of the Jalisco Nueva Generación Cartel and demand weekly fees to avoid being victims of attacks. A person who sells chopped fruit on his tricycle acknowledged that he pays up to a thousand pesos a week.

For the Governor of Nuevo León, Samuel García, now the extortionists are white-collar criminals. In a conference, the president accused his predecessor Jaime Rodríguez Calderón of having been linked, along with some of his relatives, to a network of collections of bribes and extortion in different casinos, restaurants, and other businesses of the entity.

Although Hidalgo borders entities that have a high crime rate, there are no official cases of collection of land rights.

However, the Business Coordinating Council indicated that of the 30 thousand businessmen that make it up, in the last year five of them were tried to extort money through telephone calls and a similar situation was experienced by two companies affiliated with Coparmex and 80 establishments that make up the Mexican Association of Hotels and Motels.

Unlike these entities, the business chambers of Coahuila and Durango assured that the concern regarding insecurity are calls for the purpose of extortion.

In Mexico City, extortion cases have increased 45 percent during the nine months to 2021, registering 418 investigation files initiated in the 16 municipalities, compared to 287 during the same period of the previous year. .