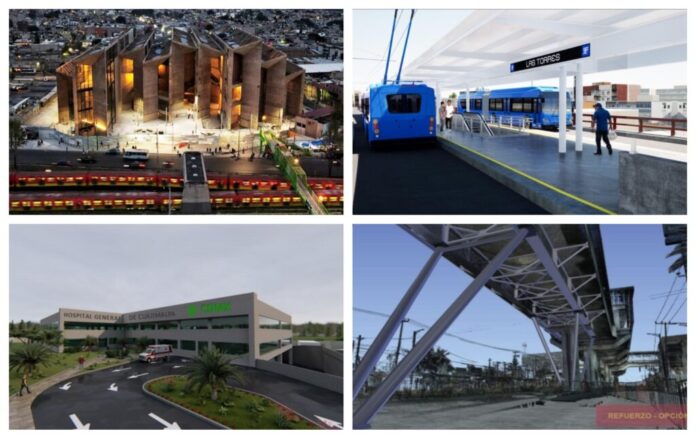 This year, the people of Chilangos gave the premiere to two Cablebus Lines, several parks that were remodeled —such as Cuemanco and Cuitláhuac -, and we enjoyed new attractions such as IztapaSauria. For this reason, we are already thinking about the 2022 projects for CDMX.

During her third government report, Claudia Sheinbaum announced 31 actions that will be launched next year in CDMX.

Among the plans, several mobility projects stand out, but also others to boost the economy and tourism.

There are even several plans that will give the city a new look, since the construction of a new Cablebús Line, a solar plant in the Central de Abastos, and the inauguration (now) of the Yankuic Museum in Iztapalapa is planned.

There are also other works that began to be built in previous years and will finally see the light in 2022.

This is the case of the Elevated Trolleybus, which was planned to open last November, but due to delays in the delivery of the material, it is expected to be ready by the second half of next year.

The orange limousine won’t be far behind, either.

Several projects are planned to renovate the Metro. This includes the installation of the new Control Center, the closing and remodeling of Line 1 and the completion of the rehabilitation works of Line 12.

3. The reconstruction of Line 12 of the Metro is expected to be completed. The works began last September and are estimated to last a year. The works consist of placing struts, beams, and diaphragms in the elevated section, while rehabilitation works will be carried out in the tunnel.

4. New Command and Control Center for Metro Lines 1 to 6. Last January 9, a fire consumed the old brain of the Metro. With the new Center, more modern and advanced technologies will be implemented in the control and operation of the trains.

5. Another of the 2022 projects in CDMX is the comprehensive modernization of the electric power supply, including the change of transformers and substation of Line 1, which had 52 without intervention.

6. The Line 1 modernization program will begin. The plan is to change tracks, integrate new systems, acquire 30 new trains and… suspend the service.

7. The stations of various Metro Lines will be maintained. That includes Pantitlán. The Metro is expected to receive a historical budget for its modernization.

8. The Elevated Trolleybus in Ermita Iztapalapa will also be given the green light. The plan is for the works to conclude in the second half of next year.
The objective of this transport is to transport 76 thousand people every day and benefit 130 thousand inhabitants.

9. Among the 2022 projects in CDMX, the construction of a Trolleybus will also stand out, which will have an elevated section, and will go from Chalco to Tláhuac and from Chalco to Santa Marta, as well as the modernization of Line A of the Metro.

10. A university campus will be built in the Milpa Alta Mayor’s Office. In addition, it is planned to finish two fire stations.

11. The Tláhuac Forest, the Magdalena Mixhuca, the Periférico Oriente will be intervened and the third stage of the Grand Canal will be concluded. Conagua plans to carry out maintenance on the Río de los Remedios.

12. Work will continue on the Bosque de Chapultepec, Nature and Culture Project, in which the Fourth Section stands out, with a new Cineteca and cultural programs.

13. Construction of the new Cablebús line will begin. This will connect the four Sections of the Chapultepec Forest.
The construction of a fourth line is also being evaluated, which will be defined at the beginning of next year.

14. 2,000 minibusses will be replaced between 2022 and 2023; The purpose of this is that the concessional transport can integrate the Mobility Card as a payment method.

15. After more than three years of work, it will finally be the inauguration of the Yankuic Museum in Iztapalapa. It has 20 thousand square meters and is aimed mainly at boys and girls.

16. Another of the 2022 projects in CDMX is the inauguration of the largest solar plant in any city in the world. It will have an installed capacity of 27 MegaWatts and is being developed in coordination with the Ministry of Energy. This facility will be operated by the CFE on the roofs of the Central de Abasto.

17. A Comprehensive Water Supply Program for the Metropolitan Area will be launched. It is planned to improve the Cutzamala System with new supply sources: the Madín Dam, PAI Norte, and the Xico Lagoon.