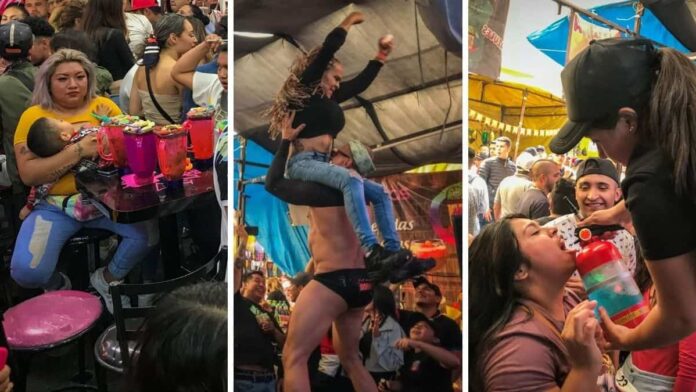 In just one year, Dolls Drinks have achieved unexpected success and has become the most famous and fashionable drinks in Tepito.

The pandemic forced many people to find a way to obtain other income and although many businesses, unfortunately, thundered in the struggle, there were others such as Dolls Drinks that emerged in the midst of uncertainty and managed to stay in the taste of the Chilangos.

Dolls Drinks, the most fashionable drinks in Tepito

In the very heart of Tepito, an emblematic and versatile neighborhood, the famous Dolls Drinks have a space where they welcome everyone who wants to have a good time with a blender in hand and music from local DJs.

But do not be fooled by the glamor of their drinks because although they are full of gummies, flowers, and many colors, the mixtures of Adrián, owner, and mixologist of the place, are so powerful that if you do not measure it you could be as bulk.

In October 2020, Adrián and his family were going through a slump at work, and in their effort to get ahead, it occurred to them to start selling chelas on a table in a parking lot.

However, Barbie, Adrián’s niece and image of Dolls Drinks, wanted to go further and take advantage of social networks to help her family.

Already with the concept more than polished, Adrián used his knowledge in cocktails to create some of the recipes for the drinks that they make in Dolls Drinks, and then add the cherry to the cake: the blenders.

Adrián knows that they were not the first to use the concept, but he is sure that they are pioneers of this and that thanks to the many others who have used the idea in their businesses.

At first, their service was exclusively to take away, as they did not have a place to receive their customers, but Adrián’s hand when preparing the drinks was one of the things that attracted people.

And it was precisely the customers who asked him to have a larger place to enjoy his creations.

A dream that Barbie and Adrián have been able to materialize, because in their new place they can now receive old and new customers with a much more offer of drinks and good music to dance.

The family business was already famous on social networks under the name of Barbie Drinks, but being such a popular name, the copies began to arrive and even an alleged demand.

But the family did not back down and decided to make some small modifications to the name and logo without losing the essence of the concept and began to be called Dolls Drinks.

Where and when to find Dolls Drinks?

This fun place is located on Calle Jesús Carranza No. 35 Col. Morelos, from Friday, Saturday, and Sunday from 2 to 7 pm (or until the body endures )

Adrián challenges you to take 3 blenders without fussing, but if you are not so extreme, take a quiet time and have a great time at Dolls Drinks, and don’t forget to follow them on Instagram.

So who really owns DOLLS DRINKS

According to information circulating on social networks, ” Dolls Drinks ” is managed by Amairany and began operating in August 2020 inside a house in Tepito, but at the beginning, the service was only for take-out.

Meanwhile, Amairany describes herself as a model, young entrepreneur, and businesswoman, whose lifestyle is always on the cutting edge, surrounding herself with glamor, travel, and luxury.

Despite this, the young woman does not forget her grandfather Pancho Cayagua, to whom, four months after his death, she dedicated an emotional message saying that she missed him.

“I need you more and more, this is all over, daddy. Since you left nothing is the same, how I would like you to call to fix all this, I miss you a lot […] I love you, dad. ”

And as if that weren’t enough, he also has his face and name tattooed on his skin, since his grandfather is his “warrior”.

Francisco Javier Hernández Gómez, better known as ” Pancho Cayagua ” was the founder of the criminal group, Unión Tepito, who was shot to death at age 44 in the parking lot of a shopping center in the Gustavo A. Madero mayor’s office.

This group was the main drug dealer in Mexico City, but it was weakened with the arrival of the “ El Betito ” gang, led by Roberto Moyado Esparza, who was previously its partner.

The man was arrested in August 2016 on charges of homicide, however, he was released after his accomplice blamed himself so as not to affect him.

The organization is accused, among other things, of the kidnapping and murder of 13 youth from the Heaven Bar in May 2013, as well as dozens of kidnappings, drug dealing, and settling accounts.

Tepito has been a place that over time has been stigmatized as a neighborhood where poverty and crime reign, therefore, when ‘El Universal’ presented a journalistic work on the concentrations of people in  Dolls Drinks, it was not surprising that many They will begin to criticize him, something that of course, has not been seen in the bars and clubs of Polanco .

It was this Monday, July 12, that the aforementioned media and of national circulation, presented a text and a series of photographs explaining that in one of the areas of Tepito, a group of people concentrated to drink micheladas and dance without taking any distance type.

In the images, you can see how men and women of all ages are concentrated, without masks and even with children, in a place that has been recognized as Dolls Drinks, an establishment that sells alcoholic beverages, which in some unleashed fury as users on Twitter they pointed out that these people who went out to Tepito were to blame for what was happening throughout the country in terms of health.

And that’s not all, because, with derogatory comments and insults, some Mexicans on social networks pointed out that these people did what they did because of a lack of education and even poverty, comments that angered another part of the population.

After the publication of El Universal came out, and criticism against the activities in Tepito began to be generated, a group of Mexicans began to question the media for only showing part of the side of the coin, detailing what was happening in Tepito was not an isolated case in CDMX, because in places like La Roma or La Condesa they were replicated.

However, Internet users assured that this was not criticized, even when there were bars in that area of ​​the capital full of people, for a matter of ” classism “, in one of the messages posted by the tweeter  @godomarto the following is read:

“Hey, the full flights have not stopped, the clandestine parties in Departamento or some other” cool “place in Roma and Condesa are going to burst. I do not justify anything, but waters with nothing more to criticize Tepito and La Lagunilla because they are notices their classirracism for miles. “

Likewise, there were those who pointed out that what happened between one area and the other was not criticized in the same way, because while in the case of crowded bars in La Condesa it was seen as an opportunity for economic reactivation, in Tepito it was only considered an agglomeration of people.

For this reason, some agreed that just as what was shown in Tepito was criticized and that they say it was judged in such a way as it was considered a “marginalized” area, they asked that the party and entertainment centers of other areas in Polanco be visited as well so that They saw that the same thing happened and people were only stigmatizing people according to the area they visited.

“It is the same Tepito, Cancún, Polanco, La Condesa, Ecatepec and Coyoacán in terms of epidemiological risk in this new wave of COVID-19. Do not classify people like that just.” – It is read in a tweet from  @MediCasos .

The truth is that the debate on social networks does not lie in whether what happens in Tepito is right or wrong, but rather that this place is judged only for that, for its location and the people who come to it, even if what happens The same in other parts of the CDMX, they point out that because of ” classism “, it is not criticized in the same way and in that sense, there are those who point out, they have to judge themselves equally.