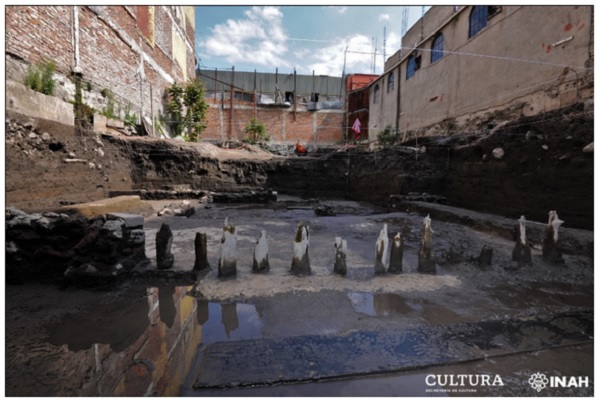 Mexico City (December 1, 2021).- Archaeologists from Mexico’s National Institue of Anthropology and History have uncovered an altar dating back to the 16th Century near Plaza Garibaldi, the square in Mexico City famed for its mariachi musicians.

The altar dates back to the time after the Spanish conquest of the Aztec capital Tenochtitlán.

Experts say it was located in a courtyard inside a home of an Aztec family, who would have used it to honour their dead.

It contains a pot with human ashes.

The original discovery was made in August but only announced by Mexico’s National Institute for Anthropology and History (Inah) on Tuesday, after archaeologists had spent three months studying the site.

The altar dates is thought to date back to the period between 1521, when Spanish conquistador Hernán Cortés defeated the Aztec ruler of Tenochtitlán, and 1610.

The battle of Tenochtitlán is seen as the beginning of the end of the Aztec empire, which in its heyday ruled over the central Mexican highlands.

The archaeologists behind the discovery say that the inhabitants of the house would have held a ritual “to bear witness to the ending of a cycle of their lives and of their civilisation” at the altar.

Archaeologist Mara Becerra says that the altar was found four metres (13ft) below ground, underneath several layers of adobe mud.

According to Ms Becerra, the inhabitants of the house wanted to hide it from the prying eyes of the Spanish conquistadors.

She believes they were Mexica, the indigenous people who lived in the Valley of Mexico and who founded the Aztec empire.

The altar contained a pot with human ashes and 13 intricately decorated incense burners.

The house surrounding the altar was made up of a large room that was connected by a corridor to five smaller rooms, one of which is believed to be a kitchen.