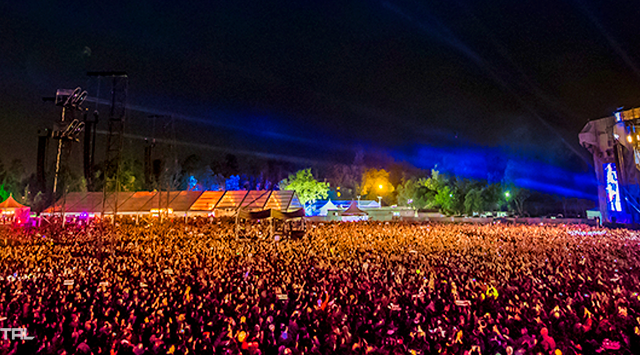 MEXICO CITY.- Being at a festival like Corona Capital in 2021 with a still latent pandemic generates mixed feelings. On the one hand, the excitement of returning to life as it was before Covid-19 – although with a face mask in between – and on the other, knowing that, precisely, the contingency is not yet over.

This is how it felt this weekend to visit the different stages installed in turn four of the Hermanos Rodríguez Autodrome, with an audience not as massive as in previous editions – in 2019, there were 95 thousand people who saw The Strokes – but much higher compared to the few events that the pandemic has allowed.

“At first I was scared because the pandemic is still not very controlled but a little fun was already needed in a concert,” said Valeria, assistant, while the singer Aurora gave her show on the Corona stage.

“I am afraid but since I am already vaccinated, one is already calmer, it only gives me something to be close to many people,” said his companion.

At the same time, there were attendees like Hugo, who, although he was one of those who on Saturday wanted to see his favorite groups, highlighted the effort to do massive shows.

“That the concerts have returned with all the measures is super cool. The pandemic is not going to end and we have to return to our lives, “he shared.

The Whitest Boy Alive, The Bravery, Rüfüs Du Sol were some of the artists who performed on the second day of the festival in which, according to official data, an attendance of 62 thousand people was registered.

The drag queen Vittar was one of those who most caught the public in addition to the most important of the night: Flight Facilities and Twenty One Pilots, which closed this edition that marked the return of mass concerts to Mexico City after the pandemic of the Covid-19.

The British duet Royal Blood was the penultimate to perform on the Corona stage, before the stars, Twenty One Pilots.

56,600 were the people who entered on Saturday, the day some artists canceled

62 thousand attendees had the second day of the festival, according to official data

Tame Impala was the band in charge of successfully closing the first day of the long-awaited festival, which hosted 59,600 attendees, according to the official figure.

The Australian neo-psychedelic music took to the stage at 10:20 pm amid euphoric screams from thousands of fans who waited all day to see them in action.

“Mexico City, how do you feel?” Said Kevin Parker, leader and vocalist of the band.

A continuous explosion of colors was present throughout their show, which together with the somewhat experimental sounds that characterize them so much, made the Hermanos Rodríguez Autodrome shake and everyone spend a night like no other.

Among the songs they performed were, “Borderline”, “Backwards”, their great success “The less I know The better”, among many more.

On the other hand, it was LP who also caught the Corona Capital especially when he performed his great worldwide hit “Lost on you.”

Due to the last-minute cancellation of Disclosure, made up of brothers Guy and Howard Lawrence, because one of them began to feel bad, LP had to delay its presentation two hours, to be in charge of closing Doritos on stage. .

Despite the last-minute changes, thousands of fans of the American enjoyed every moment of her performance, especially her voice, which many are shocked by the high notes she reaches.

Cheap Trick was also in charge of filling the main stage with a fury, despite the fact that during its presentation a light drizzle began to fall, causing the temperature to drop.

At about 8:00 p.m. the American band, made up of Rick Nielsen on guitar, vocalist Robin Zander and Tom Petersson on bass, took the stage for a musical tour.

«Mexico, how are you? Thank you very much for coming to see us, ”said the seventies band.

Meanwhile, Dayglow also caught the audience on the Bosque stage, where he performed several of his hits from his album Fuzzybrain, which he released in 2018, which marked his debut in the world of music.

In addition to Disclosure, he also canceled his presentation The Kooks due to Luke, the group’s vocalist, taking a last minute flight because his wife was about to give birth.

“Luke, vocalist of The Kooks, is about to be a father and they inform us that he is flying back to the operating room to catch up with his wife,” Corona Capital posted on his Twitter account.

Also ST. Vincent announced its cancellation a couple of days before the event, after a member of his team tested positive for Covid-19.

Despite the cancellations, thousands of attendees decided to have a great time and enjoy a festival that despite all the challenges faced by the organizers, they were able to move forward.

After ST. Vincent, The Kooks and Disclosure will cancel their presentation at Corona Capital 2021, the festival made a decision so that attendees do not have a bad taste in their mouths and have a good memory of the first festival that returns to Mexico City after the moments toughest of the pandemic.

Through their social networks, Corona pointed out that the cancellation of the bands was out of their control, however, they assured that the first day of the festival is being very exciting.

«We regret the absence of ST. Vincent for contagion of Covid-19; from The Kooks for family reasons, as well as the one announced at the last minute by Disclosure due to illness. All of them out of our control ”, it reads.

Over the weekend Corona Capital 2021 was held, which roughly meant the return of music festivals to CDMX after the ravages caused by the Coronavirus pandemic.

Thousands of fans gathered at the now traditional Turn 4 of the Hermanos Rodríguez Autodrome to enjoy their favorite international acts; however, the event was not without its drawbacks or hardships.

As many of you will know, three of the main events of Corona Capital 2021 canceled their participation for the day of Saturday (November 20), which naturally angered some ticket buyers, who are already planning to file a class-action lawsuit with the Attorney General’s Office. Consumer Federal ( PROFECO ).

And it is that although OCESA offered facilities to enter the activities on Sunday completely free of charge – by way of compensation-; that was not enough for many spectators who felt disappointed by the organization of the event.

Through social networks, the complaints were agglutinated, and PROFECO itself recommended that users proceed with a collective lawsuit.

Who were the acts that they canceled?

The first to get off the Corona Capital 2021 ship was St. Vincent. The Tulsa, Oklahoma, artist publicly admitted that one of her staff members had tested positive for Coronavirus, making it impossible for her to travel to the Mexican capital. His announcement came three days before the event.

For its part, the English group The Kooks announced its cancellation at the Corona Capital 2021 festival a day before the event since Luke Pritchard, vocalist of the group, had to fly to the United Kingdom on an emergency flight as his first-born son was about to be born. .

However, fortunately for the followers of The Kooks, the quartet was presented at the Metropolitan Theater the week immediately before, so the Mexicans were not left without being able to fully enjoy them.

The most controversial cancellation was undoubtedly that of Disclosure, who reversed their presentation at Corona Capital 2021 just a few minutes after having to go on stage.

Through social networks, the English duo reported that Guy Lawrence was suffering from a severe stomach infection and that, despite their efforts, it was impossible for them to perform at the festival.