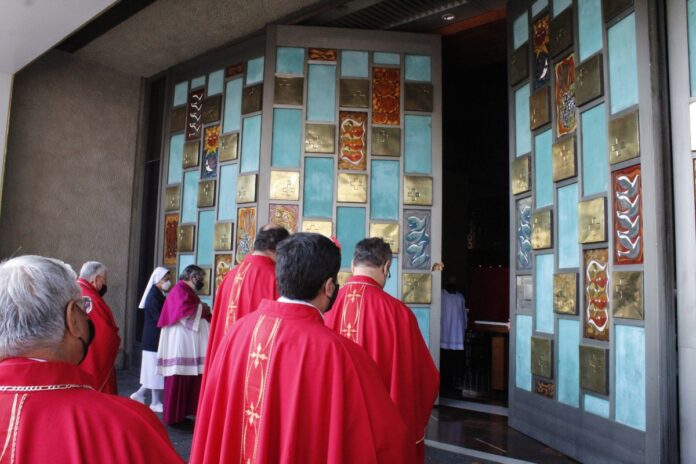 Cardinal Carlos Aguiar Retes, Archbishop of Mexico, blessed and opened the Holy Door of the Basilica of Guadalupe on Sunday, November 14, on the occasion of the 100th anniversary of the bomb attack on the image of the Virgin of Guadalupe, on November 14, 1921, in which miraculously, the cloak of San Juan Diego suffered no damage.

With the opening of the Holy Door, therefore, an extraordinary Jubilee Year begins, which will close on November 20, 2022, on the solemnity of Christ the King of the Universe, during which the faithful will be able to obtain a plenary indulgence under the usual conditions established by the Apostolic Penitentiary.

According to news sent to Fides by Desde la Fe, the information service of the archdiocese of Mexico, the act of vandalism took place on the morning of November 14, 1921, when a man, presumably an employee of the private Secretariat of the Presidency, placed a bomb hidden in a bunch of flowers, in front of the sacred image.

With the detonation, the altar and the marble sculptures that flanked it suffered damage as well as a bronze crucifix of 34 kilos that was bent by the shock wave, even the foundations of the old Cathedral were damaged, however, the glass that covered the image of the Virgin was not even scratched.

This bomb attack caused great indignation among the Mexicans, because in addition to being a serious sacrilegious act, it also threatened the identity of the Mexicanos Guadalupanos, since the Virgin of Guadalupe was the banner with which the Father of the Fatherland, Fr. Miguel Hidalgo, invited the people to join the struggle for the country’s independence.