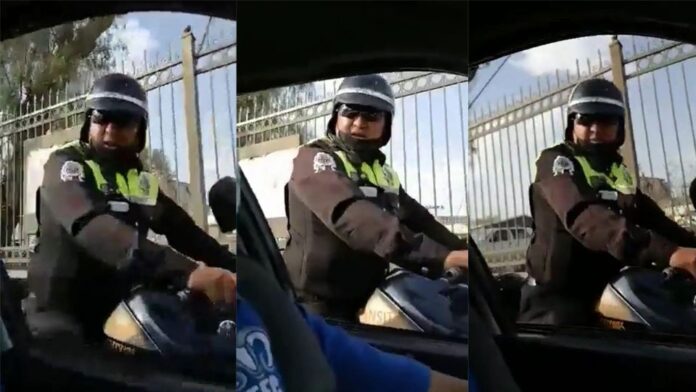 Estado de Mexico.- After the murder of the famous Televisa actor, Octavio Ocaña, in Cuautitlán, and where there are precise accusations against police officers, the municipality is once again in the eye of the hurricane. Once again with the intervention of a policeman, who this time intimidated a driver, who recorded everything.

“Don’t de an asshole, son, you’re already huevu% $% dont5 play stupid, dog. So, son, right now I’m going to bring a partner,” the agent is heard saying in the video that it is already circulating on the networks.

According to what was observed in the video, the policeman intends to infringe the driver of a vehicle, however, he argues that he cannot do so, since he is not empowered to do so.

Which makes the police element angry. For a few moments, he follows him, on his motorcycle, as he intimidates him. The moment comes when the driver asks the woman to accompany him not to stop recording. But shortly the video ends.

After this video was published on social networks, users indicate that they know the policeman who appears there. And they even expose similar situations in which they were victims. So apparently it is not the first time that the corrupt police acts in this way.

That guy always puts himself in the temple of the hill, he wanted to extort $ 2,700.00 pesos from me and that is his vocabulary, obvious when I told him to take me to the tow yard and that I will pay my fine where it should be paid, he let me go when he saw that I was not going to get money.